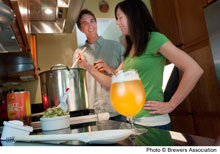 BOULDER, CO – With homebrewing’s popularity growing by leaps and bounds, there’s never been a better time to learn how to make beer. The public’s thirst for homebrewing instruction is increasing alongside the growing ranks of homebrewers, now estimated at approximately 1 million nationwide.

The American Homebrewers Association (AHA) organizes the annual Learn to Homebrew Day event on the first Saturday of November to introduce friends and family to the hobby. This year, on November 3, thousands will gather at homebrewing events throughout the U.S. and beyond to share the fun of brewing beer at home.

Experienced homebrewers who want to share their knowledge with newcomers will organize events—small and large alike—at their homes, local homebrew shops and other locations. Those seeking to learn the hobby or participate at an existing event will find a complete listing of Learn to Homebrew Day eventsposted on the AHA website. Currently, nearly 100 sites are registered, with new locations being posted every day.

In addition to Learn to Homebrew Day, the AHA offers numerous resources to instruct and encourage new homebrewers, including a comprehensive online guide to getting started, Zymurgy: An Introduction to Homebrewing,instructional videos, the AHA Forum and more.

Beer lovers are invited to learn more about the dynamic world of craft beer at CraftBeer.com. Follow the AHA on Twitter, and join us on Facebook.