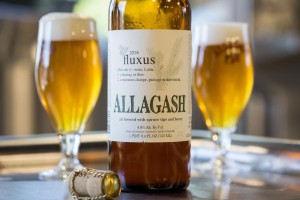 Portland, ME — An accountant and a scientist walk into a bar…and helped brew the 2014 Fluxus from Allagash Brewing Company.

Two Allagash employees (and part-time farmers on the side) – Financial controller and Master Beekeeper Erin Forbes and lab and sensory scientist Karl Arnberg – collaborated to develop this year’s recipe. Beginning in 2007, Allagash has been brewing a unique beer each year to commemorate the anniversary of their first beer sold in July 1995.

“‘Fluxus’ is Latin for continuous change, and each year Fluxus is brewed with a different recipe,” said Jason Perkins, brewmaster. “This gives our brewers the chance to push the limits of beer.”

This year’s Fluxus is a strong amber ale brewed with honey and spruce tips. Aromas of candied grape, honey and tropical fruit and flavors of toasted malt, honey and spice make this beer a perfect complement for a summer afternoon in New England

“We were inspired to brew this beer because both honey and spruce tips are ingredients that could have been easily sourced by people in New England going back hundreds of years,” said Forbes. “It took approximately 1.7 million bees to produce the more than 2800 pounds of honey used in the production of this year’s batch.”

“I enjoy how the honey sweetness is balanced by the resinous flavor of the spruce tips,” said Arnberg. “Spruce tips are traditional ingredients and were used for bittering in New England tradition for centuries, especially when hops weren’t available.”

A portion of the proceeds from the sale of every bottle ($1) and a pint ($0.25) of Fluxus is donated to the Allagash Pediatric Nurses Scholarship in the Barbara Bush Children’s Hospital at Maine Medical Center.

In the 7 years since first releasing Fluxus, Allagash has donated over $98,000 to the scholarship, helping 58 different nurses. At an event on August 23, Allagash will announce their 2014 donation amount.

“The funds were incredibly useful in terms of helping me to afford to take additional nurse training,” said scholarship recipient Linda Brady III RNC BSN. “I know these scholarships have helped me become a better nurse for the patients to whom I provide care.”

“This beer embodies so much of what we’re about,” said founder and brewer Rob Tod. “Our passion for sustainability, for innovation, for family, and community are captured in this one bottle.”

Fluxus is one of the beers in the Allagash Tribute Series. The other beers include:

“We’re proud to be able to support pediatric nurses at the Barbara Bush Children’s Hospital” said Tod. “While we are a brewery with national reach, we focus our philanthropy locally to help enrich our community.”

This year’s Fluxus is a bier de miel brewed with a blend of 2-row and vienna malts, spruce tips and honey. It was hopped with Hallertau and was fermented with the Allagash house yeast. The resulting beer is pale yellow in color with honey and spruce notes throughout the flavor and aroma. The honey and spruce strike a balance that allow both to express themselves, while a pleasant malt character keeps either from taking over. The finish of this medium bodied ale is long and warming.

Allagash was founded by Rob Tod in 1995, and has grown from a one-man operation into one of the Top 50 Craft Breweries in U.S. (by sales volume) and a spot on Maine’s Best Places to Work list in 2013. Allagash brews Belgian inspired beers and is best known for its flagship beer, Allagash White. Allagash has won many national and international awards in its 19 years, and is viewed as a leader of innovative brewing techniques in the craft beer world. Being environmentally and socially responsible is a core value at Allagash, constantly working to lessen the environmental impact of their operations. Allagash distributes beer in 17 states and DC.