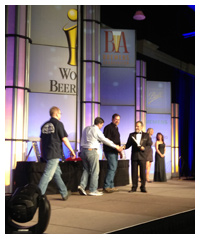 JUNEAU, AK – The 2012 World Beer Cup set a new record Saturday as the largest global commercial beer competition, earning it’s moniker as the “Olympics of beer.” Nearly 4000 beers were entered this year and of the only 284 awards given, Alaskan Brewing won medals for three of their beers — Alaskan Amber, Alaskan Stout and Alaskan IPA.

“It’s called ‘The Olympics of Beer’ competition for good reason,” said Brewer’s Association (BA) president Charlie Papazian in a press release announcing the 2012 winners. “The event brings together great brewers from all corners of the globe. A brewer who wins a World Beer Cup gold knows that their winning beer represents the best of that beer style in the world.”

Judges at the biennial international competition blind tasted 3,921 beers from 799 breweries in 54 countries to award gold, silver and bronze medals in 95 beer categories.

“It’s an honor to win at the World Beer Cup, in the presence of so many great brewers from around the world,” said Curtis Holmes, Alaskan Brewing Plant Manager who was on hand to accept the medals at the May 5 award ceremony. “To represent Alaska and come home with three medals was just amazing, especially given the number of entries in the competition this year.

According to the Brewer’s Association, judges from 27 countries conducted blind tasting evaluations of the beers to determine the awards. Composed of both professional brewers and industry experts, more than 67 percent of the 211 judges came from countries outside the United States.

A detailed analysis of the entries and awards can be found in the 2010 Brewers Association World Beer Cup Fact Sheet (PDF).