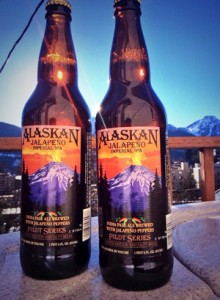 JUNEAU, Alaska — Alaskan Brewing Company’s newest Pilot Series release is a Double IPA brewed with jalape├▒o peppers, available in 22 oz. bottles and on draft throughout the 15 states where Alaskan is distributed.

“Our brewers were on a quest to brew up a hop-forward beer with a smooth malt body and just enough heat to stave off the Alaskan cold,” said brewer Rob Day. “They were interested in maximizing the jalape├▒o to showcase its flavor and aroma.”

Alaskan Jalape├▒o Imperial IPA is made from glacier-fed water, the finest quality Centennial, Sterling, Magnum, and Apollo hops, premium two-row and specialty malts, and a whole lot of fresh jalape├▒os.

An early review was posted on our Facebook page by a consumer in Colorado — Dale Roberts:

“I was “window shopping” yesterday and was shocked to see a release from one of my favorite breweries sitting there on the shelf. I think there was a ray of light glimmering off the gold crown on the top. Needless to say this mystery bottle found its way home with me and I could not wait to dive in last night!

Anyway (as I wipe the drool off my lower lip) this beer is awesomeness in a 22oz bottle! The jalape├▒o is just the right amount of spice in the beer to keep it from being a novelty. Great nose of roasted pepper goodness followed by a nice hop presence. Medium body perfectly balanced malt to hop then as you take that breathe after swallowing the nectar in your mouth a nice simmer is left, warming your soul! This beer was incredible (actually the song from the Lego Movie pops in my head when I talk about it…) and highly recommended if you have any like chili beers, etc.”

Thanks Dale — we couldn’t have said it any better! Alaskan Jalape├▒o Imperial IPA is available now through June.

The Alaskan Pilot Series showcases the boundless creativity of the Alaskan Brew Crew through a rotating collection of big, bold and distinctive brews packaged in 22 oz bottles. Each new recipe is first perfected in our 10-barrel pilot brewhouse, then tested through our Rough Draft series of draft-only beers. Those special brews that fly beyond expectations ascend to a limited release in the Alaskan Pilot Series.