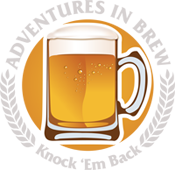 Chandler, AZ/Denver, CO — The hit web show “Adventures in Brew” has been a crowd favorite ever since it hit the air in early 2013. James Swann is the host and beer expert behind “Adventures in Brew” and his decades of beer knowledge and beer brewing experience encompass a love of beer that began back in England where Swann grew up. “I’ve grown up working in bars, restaurants and pubs all my life,” stated Swann. His vast experience in brewing will undoubtedly catapult “Adventures in Brew” to the head of the class of special interest shows.

Instead of going with Kickstarter, Adventures in Brew chose the CrowdBrewed.com platform to launch their fundraising campaign. “The crowdfunding is like Kickstarter, but it’s only focused on the craft beer industry, so this is really exciting,” said Swann. “When we’re on the road, we’ll have the chance to visit craft breweries all over and discover what makes them special, we’ll conduct interviews, play beer challenge games and get to know brew masters from across the country.”

Those wishing to support Adventures In Brew’s crowd funding campaign can learn more and make a pledge athttps://crowdbrewed.com/rewards/campaigns/adventures-in-brew/

“Adventures in Brew” has partnered with Black Dog Promotions and its CEO and Founder, Scott Kelly for marketing and public relations to launch the show on a national basis and get it out on the road. Kelly said, “Viewers and fans have already been very receptive to ‘Adventures in Brew.’ Not only is it educational, but it’s a completely fun romp, from start to finish. James Swann is likeable and so knowledgeable about beer, that we expect that audiences will always want to tune in to see what kind of craziness is taking place. We feel that CrowdBrewed.com is the perfect place to kick off our crowdfunding endeavors.”

The part of the country where the crowdfunding comes from is where the funds will be spent. “For instance, if a bunch of people in a particular area of Colorado get together and fund, we’ll be off to Colorado to do the show,” Swann stated. “Personally, I would lean towards San Diego and moving up to Orange County and around Denver Colorado, but it’s really up to those people who help fund the show. If they decide we should be in Florida, then that’s where we’ll go.” Travel expenses and a production crew will all be specific expenses paid for by crowdfunding money. “It’s going to be a blast and everywhere that we’ve done a show so far; the feedback has been phenomenal.

CrowdBrewed.com has become the “de facto” standard for craft beer crowdfunding ever since USA TODAY ran an article in August 2012, touting the company as “the first-ever crowdfunding site designed specifically for craft beer entrepreneurs.” CrowdBrewed was created to provide a secure, transparent platform for companies to obtain the financing they need to grow their businesses. At the same time, investors can use CrowdBrewed to invest in companies in the fast-growing and exciting craft beer industry.

CrowdBrewed.com is a donation/reward crowdfunding platform for craft brewers and beer industry affiliates who want to raise money for just about anything as it relates to beer. Specially-targeted fundraising campaigns are created to tell the story to a crowd of potential donors and supporters in exchange for a reward or product. Their site is where others can discover new beers, learn about brewing and get involved in the industry.