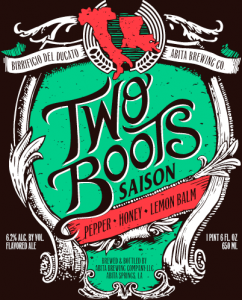 Covington, LA — We are happy to announce that Abita Beer will be creating our first ever collaboration brew with Birrificio del Ducato. Two Boots, appropriately named for the shape of Louisiana and Italy, is a Saison brewed with peppercorn, lemon balm and honey.

Birrificio del Ducato is an award-winning craft brewery located in Parma, Italy that uses natural and local ingredients. Brewmaster, Giovanni Campari, visited our brewery recently to meet with me and conduct a small initial brew.

Two boots will be made with pilsner and wheat malts and hopped with German Perle hops. We used a local producer of raw honey, Blood River Honey, to give the brew a very dry finish, which is great for a Saison. The addition of the lemon, green and pink peppercorn enhances the overall flavor of the brew.

The honey is added in the brewhouse at the end of the boil, and then the lemon balm and pepper is added in the aging tank. Adding the pepper to aging tank will impart the flavor and aroma without adding as much heat and spice. Finally, adding the lemon balm to the aging tank will impart the fresh flavor and aroma of the herb. In the end this is a very balanced beer with the flavors of the malted barley, wheat, hops, yeast, herbs, and honey all blending together for a refreshing brew.

Two Boots will be released in very limited quantities on draft in August 2014. It will be available in 22oz bottles and as a select on draft in spring 2015.

This Saison will pair very well with almost any salad. It goes well with fish, shrimp and lobster, even if the dishes are very spicy and delicate.