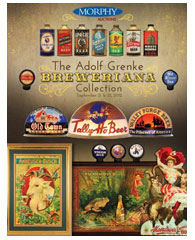 DENVER, PA – Forty years ago, Chicago businessman Adolf Grenkediscovered beer cans — not for their contents, as he seldom touches a drop — but for their collectibility.

“My wife had taken our two young sons to an educational lecture sponsored by the parks department in the Chicago suburb where we live,” said Grenke. “The fellow making the presentation was a Meister Brau Beer salesman. He was there to encourage kids to collect beer cans and even handed out empty sample cans.”

Grenke’s sons took an immediate liking to the idea of amassing beer cans from various breweries, but it wasn’t until later, during a family vacation in Texas, that Grenke himself caught the collecting bug.

“We were on our way to the Alamo when one of my sons spotted beer cans on the side of the road near a golf course. I was all dressed up, but we pulled over, and soon I was in the mud pulling up beer cans right along with my sons,” Grenke said with a laugh.

After a few years of collecting and watching the prices escalate on vintage cans, Grenke began networking through breweriana collector clubs. He soon became known as a serious buyer who would pay the price to own the rarest beer cans.

Grenke’s 4,000-piece collection, which has been featured in numerous reference books and price guides, will be auctioned on Sept. 21-22. The grouping includes 500 rare beer cans, 400 beer taps emblazoned with beer brands and brewery names, many 19th and early 20th century beer advertising signs and artworks; and a mind-boggling array of “smalls” — promotional buttons, watch fobs, match safes and pocketknives. Some were company giveaways for bar customers, while others were employee items or mail-in premiums.

“Adolf was always a ‘condition’ collector,” said Dan Morphy, CEO of Morphy Auctions, producer of the upcoming 1,800-lot sale. “Not only are the items in his collection in pristine condition, many are the only known examples of their kind. One rare can, which originally held Gibbons Bock, is the most desirable of all bock beer cans. It could make $50,000 at auction.”

Morphy predicts the sale will be “a barnburner. Collectors are flying in from all over the country to bid, and we also expect heavy Internet competition.”