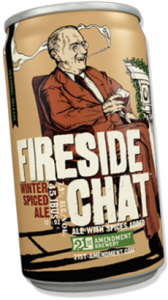 San Francisco, CA – ‘Tis the season that evokes memories of good friends, delicious meals and a warm fire – the very elements that inspire the brewers at 21st Amendment Brewery as they develop their seasonal spiced ale, Fireside Chat, a holiday favorite each year. A true artisanal craft brew, Fireside Chat is in stores now and will be available throughout the holiday season.

As the days grow shorter and the leaves begin changing, Brewmaster and Co-Founder Shaun O’Sullivan follows own his fall tradition and heads over to San Francisco’s Rainbow Grocery Co-op, where he loses all sense of time in the spice aisle. “It’s one of my favorite days of the year, when I can just play for an afternoon, exploring all the interesting, exotic spices. It’s almost dizzying to be among the galangal, orange peel, nutmeg and anise, but somehow I manage to escape with spice bags in hand, and at least a rough idea of what I’m going to include in Fireside Chat,” he said. While Shaun would not reveal the secret spice mix in the 2013 Fireside Chat, he did mention that he included two of his favorites: orange peel and ginger.

Co-Founder Nico Freccia said, “Fireside Chat is one of my favorite beers, with origins that date back to our first Holiday Spiced Ale, and represents several firsts. It is the first spiced beer we ever brewed, the first beer we ever packaged – and don’t tell anyone it was in a bottle and not in a can! – and our first beer to ever win a medal, taking Gold at GABF in 2001. What makes it one of my favorites is its fine balance between the malty, warming English-style ale, some solid bitterness and the subtle aroma and flavor of the spices – which together conjure up the best of the holiday season.”

Fireside Chat pairs well with the rich, often spiced foods enjoyed during the holidays. In addition to the secret spices, it is brewed with a variety of malts including aromatic, caramel and chocolate. The result is a subtle twist on the traditional seasonal brew. Like FDR’s depression-era radio addresses, Fireside Chat, at 7.9% alcohol and 45 IBUs, is like “a kick in the butt and a hug at the same time,” said Brewmaster Shaun.

Fireside Chat is available through December in cans and on draft at bars and stores in all seventeen of 21st Amendment’s current distribution territories which include CA, OR, WA, AK, ID, MN, OH, MA, NY, NJ, DC, MD, DE, PA, VA, GA and NC. For up to date availability, events and promotions, visit 21A’s website at www.21st-Amendment.com.