TAMPA, FL – This Saturday marks the release of Cigar City's Hunahpu's Imperial Stout. The event will take place from 12 PM – midnight and feature some guest taps. See the details below for more information. 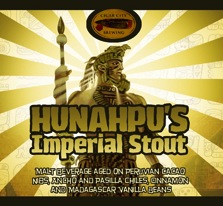 The first 750 people who receive a wristband will be able to buy Hunahpu’s Imperial Stout (up to 4 bottles) when it goes on sale at 6pm. If you are paying by credit card you will be able to pre-pay for your bottles immediately or throughout the day so that you can quickly get your bottles when they go on sale. If there are any bottles left after all 750 people have come to claim/buy their bottles OR 9pm (leaving a 3 hour window for you to claim your bottles if you have a wristband) the remaining bottles will go on sale to the public. Bottles will be for sale ONLY at the brewery. They will not go into distribution.

*Re-Entry is allowed throughout the day so you can come and get your wristband and come back later if you have something else to do, it is not required that you be here all day to claim your bottles at 6pm.

In addition to Hunaphu’s Imperial Stout, we will have other limited bottles for sale in the brewery:

Below is a list of special release growlers we will be pouring this Saturday during the event. Due to the crowds we expect, we will be pouring only the special release beers listed below in the brewery. Our regular offerings will be available on Friday and Sunday in the tasting room but we will not be filling growlers in the tasting room on Saturday.