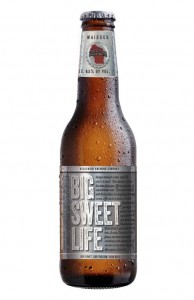 Wisconsin – When a new craft beer is developed, the focus is usually on flavor. But in the case of #005 Big Sweet Life, philosophy played an equally vital role. With spring finally in the air after a long cold winter, WBC Brewmaster Kirby Nelson had a taste for a Maibock. For inspiration, he drew upon his decades of brewing expertise, the finest quality ingredients — and his own take on the meaning of life.

“Big Sweet Life isn’t the first name you think of, when you think of naming a beer,” said Nelson. “But in the case of #005, it was a perfect match. This malt-forward Maibock does a nice job of paralleling our time on this planet: Richness, flavor, pleasant times and just a hint of bitterness to keep it real. Life is sweet, folks — drink it in!”

Big Sweet Life is not only the first Maibock brewed by Wisconsin Brewing Company; it’s also the first WBC craft beer that was given a name that reflects something more than the flavor of the beer. “In the case of Big Sweet Life, we thought it was a great idea,” said WBC president Carl Nolen. “When Kirby described his take on it, explaining how life can have its tough moments, but in the end it’s something worth savoring, worth grabbing hold of and living to its fullest, we said ‘wait a minute, that’s not just your philosophy, that’s the entire brewery’s philosophy!’ We could relate to that. So embracing the name was very easy.”

#005 Big Sweet Life is scheduled to debut at retailers, bars and restaurants throughout Wisconsin on April 14. It will be available in 6-pack bottles and on draught.