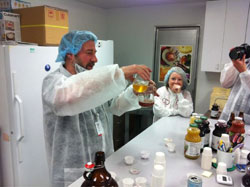 CHICO, CA – Purple carrots, purple potatoes and red rice sound more like ingredients for vegetarian lunch, not a beer. But when you put the likes of Dogfish Head, Avery Brewing, The Lost Abbey, Allagash and Sierra Nevada together, anything is possible.

As is the case with most collaborative efforts, it all started over beers. At last year’s Great American Beer Festival (GABF), the five brewers attended a beer and food pairing dinner and began kicking around the idea of collaboration.

“We aren’t sure about a name yet, but we know it will be a session beer and come in around 5.0%,” said Bill Manley, Communications Coordinator for Sierra Nevada. 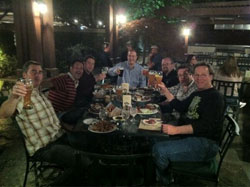 The yet-to-be-named beer is being made with purple carrots, purple potatoes, red rice, honey, and driftwood from both coasts. Manley also said that some local mint might find its way into the brew.

The beer will be available on draft only at each breweries respective pubs and tasting rooms, and should be complete next month.

Recently, news broke that Sierra Nevada was searching for a potential new site to build a brewery. Citing the rising gas prices, their growth projections and the need for space, Manley said that within the next two to three years they will need to either add more space to the current facility in Chico or build a new site all together.

Manley confirmed that they have narrowed down an initial list of about 300 potential sites to 6 but could not comment on which areas of the country the search was narrowed to. He did note that if they were to build in a completely new area it would make the most sense to do it on the east coast.

“We really haven’t made a decision either way yet,” said Manley. “We prefer to build from scratch rather than taking over an existing facility. Quite frankly most places that are already built wouldn’t be up to our standards.”

Manley said they began looking into the various possibilities almost four years ago. Sierra Nevada will determine where their new site is located based on factors such as ease of shipping, water quality and most important quality of life.

“We want to stay close to our Chico roots,” said Manley. “We wouldn’t want to put the brewery in a big city, that’s just not us.”