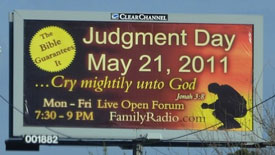 So I’m sure by now you have heard the rumors. Yes it’s true – the world is ending this weekend. Saturday, May 21st at 6 p.m. (I’m still trying to confirm what time zone that is), something known as “The Rapture” will be occuring.

Not familiar? I wasn’t either. To tell you the truth, when the editor of our Beverage Spectrum magazine, Jeff Klineman, first mentioned the so call “Rapture,” I thought he was referencing the 2001 single by Iio.

So I did a bit of research, and turns out this dude Harold Camping has officially predicted that approximately 200 million people (roughly 3% of the world) will be raptured and sent to heaven. Life as we know it will deteriorate and we will all begin slowly dying until October 21st when the world will officially end.

Heavy stuff huh? I think I am going to need a beer.

That got me thinking- if I’m going to die, and the world is going to end, what beer do I want in my hand when all of this goes down?

Seems a bit unfair to pick just one with all the great offerings to choose from, but hey, Campings went through all the trouble of mathematically predicting the end of the world, so the least I could do is narrow down the options right?

So without further adieu, I present to you my top ten beers to drink before you die…which is tomorrow so you better hurry up!

10. 21st Amendment’s Monk’s Blood – “Monk’s Blood pays homage to the monks of Belgium’s monasteries who have been brewing some of the world’s great beer for centuries.”

I mean if there is a beer I want on my last day on earth, what better way to go out than drinking the blood of a monk right? That’s got to increase my chances of being saved.

9. The Lost Abbey’s Judgement Day – “The story has been told and we and have been warned about this very moment- Judgment Day and the end of the world as we cease to know it.”

I dare the Rapture to judge me with this in my hand! The Lost Abbey knew it was coming, so I might as well pay tribute to their foresight and drink a glass.

8. Stone Brewing’s Arrogant Bastard Ale – “This is an aggressive beer. You probably won’t like it. It is quite doubtful that you have the taste or sophistication to appreciate an ale of this quality and depth.”

Well I’ve been arrogant my entire life, so why stop now? If anything, I’m going to be more arrogant. The world is ending? Everyone is dying? Yeah not me – I’m way too good for that. Another Arrogant Bastard Ale please!

7. Dogfish Head’s Hellhound on my Ale – “Robert Johnson purportedly sold his soul to the Devil at the crossroads of Highway 61 and Highway 49 in exchange for uncanny musical prowess.”

Not only is this beer delicious, it was inspired by a guy who sold his soul to the Devil. The Devil folks. Maybe if I drink enough of this, The Devil will save me?

Look if you can’t see why I want to drink this before the world ends, you might as well stop reading. I not only get to make a deal with the Devil, but I also get yeast direct from a Trappist monastery? Where do I sign up?

5. Russian River’s Damnation – “Sometimes the name is curious, now and then it is diabolical and other times it is just plain silly.”

Let’s be honest, the world is ending right? That means I’ll probably end up in a lake of fire banished to everlasting divine punishment. If that’s the case, I’m taking a case of damnation with me.

Hell Hath No Furry…like a man who just wants to drink good craft beer before the world ends. Warm, roasted notes of coffee and dark chocolate sounds like a fine way to spend my waning moment on earth.

3. Russian River’s Consecration – “n. The act of dedication to the service & worship of a deity.”

Well the word literally means “to associate with the sacred.” One thing is for sure, this beer is sacred. Hands down my favorite sour beer on earth. Since the world is ending, I’m definitely drinking a glass of this.

2. BrewDog’s The End of History – “Introducing the World’s Strongest and World’s Most Expensive Beer.”

Well if I am going to go out, I might as well go out with a bang and drink a beer that checks in at 55% ABV and pours out of the mouth of a dead squirrel. World’s most expensive beer? Sure, I’m going to die anyways!

1. Unibroue’s La Fin Du Monde – “It is brewed in honor of the intrepid European explorers who believed they had reached the “end of the world” when they discovered North America ‘the new world’.”

This selection needs no explanation, so let me instead paint a picture. The earth is crumbling around us, earthquakes are splitting complete land masses in half, fire and brimstone all around. I’m sitting on my porch, legs kicked up on the railing enjoying my last beer on earth – a beer that any craft beer fan would be proud to drink when the world ends.