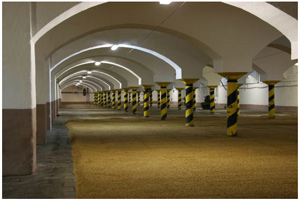 There was once a simpler time — before modern transportation, mechanized agriculture, and factory foods — when every dish and every beverage, including beer, that mankind put on the table at mealtime was “craft,” that is, made by hand; and it came from local fields instead of distant food processing plants. The beers made until only about a century or two ago, therefore, were always a reflection of the flavors of their locales — their terroir, to borrow a term from the world of wine. It was simply that difference in the character of local ingredients that gave rise to the many beer styles we still treasure today.

Until recently, however, if a brewer sought to reproduce a traditional, localized beer style authentically he or she could learn about the process from old texts, but generally could not obtain the old-style malts called for by these texts. To fill this void, the Weyermann┬« Malting Company of Bamberg, Germany, has been developing a new portfolio of “heirloom” and “terroir” malts, some of which go back in time, while others come from major brew cultures, and some do both. These new malts are designed to meet a growing interest by sophisticated consumers in authentic traditional beers styles. They also open up new and creative avenues for brewers to engage in exciting new experimentation. The new Weyermann┬« heirloom and terroir malts are:

These new malts from Weyermann┬« take their place next to other, well established Weyermann┬« malts with special heirloom and terroir characteristics, such as the venerable Rauchmalz for Bamberg-style smoked lagers; the unusual Dinkelmalz (a dehusked spelt malt made from Triticum spelta, an heirloom hard-kernel wheat variety) for old-fashioned southwestern German spelt ales; Rye Malt, Cararye┬«, and Chocolate Rye Malt for different variations of the German Roggenbier ale of medieval lineage; Caraaroma┬«, which is wellsuited for Belgian recipes calling for dark crystal malts with rich roasted caramel flavors; Melanoidin Malt, which is a perfect choice for Belgian-style biscuit malts; well modified Pale Ale Malt for English-style ales; Vienna Malt for Vienna Lagers; and Munich Malt and Caramunich┬« for many of the Bavarian lagers.

Brewing heirloom and terror beers authentically is all about distinct flavors, which means that all the ingredients must impart the soil, water, air, and climate characteristics of the locale where the style once emerged. For such beers, a modern brewer can now easily select the required hops from a dozen or so traditional growing areas around the world; can purchase appropriate pure yeast strains from many suppliers; and can deconstruct the local water and rebuild it to another location’s specifications. The flavor and aroma of the malt, too, must be locale- and period-specific, because it is an agricultural product after all — just as grapes are for wine-making.

It is often a matter of debate how, exactly, beers from centuries ago really tasted, but we do know that floor-malted grains, for instance, that are hand-turned the old-fashioned, labor intensive way on the germination floor, give brews a particularly earthy, deep, rich, and satisfying aroma. Another component in making authentic heirloom and terroir malts is the careful selection of cultivars. The Weyermann┬« Bohemian Pilsner Malt, for example, is produced only from the Hanka barley variety, while the Weyermann┬« floor-malted Bohemian Pilsner Malt is produced only from Bojos or Tolar. These three varieties have great authenticity value because they are genetic descendants of the mid-19th-century Czech variety Han├í, which also known as “Old-Han├í Agro-Ecotype.” Han├í was the barley in the first Pilsner mash, in 1842, and it has since become the foundation land race for hundreds of top quality brewing barley varieties cultivated throughout the world today.

As craft beer-makers have become the artisanal guardians of fresh and wholesome brews, full of personality and flavor, made from the best ingredients, and mostly for local markets, the new Weyermann┬« portfolio of heirloom and terroir malts give better-beer brewers the expanded means to satisfy their consumers’ yearnings for authentic beverages across time and cultures.