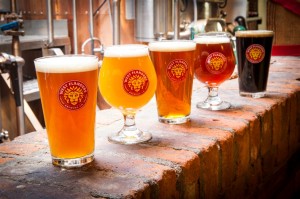 Boulder, CO — In advance of the upcoming Super Bowl between the Denver Broncos and the Seattle Seahawks, West Flanders Brewing is entering into a “we’re going to win!” wager with its brewpub peers at Seattle, Washington’s revered Elysian Brewing Company.

To raise the stakes even higher, on tapping day the host brewery must fly the Denver Broncos, er, winning team’s flag for two weeks or until the beer is gone, whichever comes first.

“My suitcase is packed and I already have the Broncos flag folded up for the trip,” says West Flanders head brewer Brian Lutz. “The Seahawks are a great team, but Manning and the Broncos are going to stampede to victory in New Jersey.”

Lutz says he is compiling a list of premium Colorado-grown ingredients to use in the beer he intends to brew in Seattle. “The beer’s gonna be delicious,” he says, “but it may leave a bad taste in the mouths of Seahawks fans.”

“I cannot wait to see the Seahawks flag raised in Colorado” says Elysian co-founder David Buhler. “The NFL’s top-ranked defense against the top-ranked offense makes this one of the most epic Super Bowl games ever. But the ‘hawks secondary is going to dismantle Manning and our offense will be in Beast mode”

West Flanders co-founder Mark Heinritz is not worried about such predictions. “The state of Washington,” Heinritz says, “has excellent breweries, incredible hop fields, and the second-best football team in the NFL. The Broncos will win.”

West Flanders recently created a controversy when a Broncos-honoring beer in its Single Keg series prompted a “cease & desist” letter from the National Football League. On Thursday, January 30 at 5 PM, West Flanders is releasing another foretelling beer in honor of the upcoming win of the Denver Broncos.

Orange in Brew Championship Ale is a special keg of our Canniption Pale Ale spiked with the zest from 18 oranges, a toss of dried orange peel, and a special dose of Omaha hops flown in by the good people of Nebraska Brewing Company in Nebraska.

Elysian Brewing Company operates out of Seattle, Washington with three brewpubs and a large-scale production facility. Led by innovative craft beer pioneer Dick Cantwell, Elysian is known for its creativity and variety and has brewed over 300 original beer recipes since opening in 1996. Elysian was named Large Brewpub of the Year three times at The Great American Beer Festival┬«.

West Flanders Brewing Company opened its doors in the fall of 2012. The artisan, gastro brewery specializes in beers that match Belgium’s innovative traditions with a Colorado sense of adventure and quality.