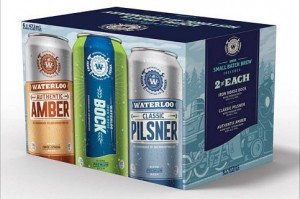 “The formation of Waterloo Brewing Co. recognizes our Company’s roots as Ontario’s original craft brewery. The history of our Company dates back to our pioneer brewery in Formosa, Ontario which was founded in 1870 just three years after Confederation” offered George Croft, President and CEO. “We wanted to give the hardworking people of Ontario a family of highly crafted products without the pretense that often accompanies craft and imported beers. We simply put every ounce of effort we have into these brews, because we know that’s what people who care about their work do.”

“Iron Horse Bock is the first of our Small Batch Brews and offers a quality you can see and taste” declared Russell Tabata, Chief Technical Officer. “We weren’t interested in crafting a beer for palette gymnastics. We wanted exceptional quality ingredients and brewing to yield a beer worthy of your hard day’s work. Iron Horse Bock delivers just that.”

Brick is Ontario’s largest Canadian-owned and Canadian-based publicly held brewery. The Company is a regional brewer of award-winning premium quality and value beers and is officially certified under British Retail Consortium (BRC) Global Standards for Food Safety, one of the highest and most internationally recognized standards for safe food production. Founded in 1984, Brick Brewing Co. was the first craft brewery to start up in Ontario, and is credited with pioneering the present day craft brewing renaissance in Canada. Brick has complemented its Waterloo brand premium craft beers with other popular brands such as Laker, Red Baron, Red Cap and Formosa Springs Draft. In March 2011, Brick purchased the Canadian rights to the Seagram Coolers and now produces, sells, markets and distributes Seagram Coolers across Canada. Brick trades on the TSX under the symbol BRB.