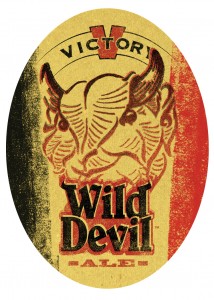 Downingtown, PA — Victory Brewing Company┬« (Victory) is pleased to announce WildDevil IPA, an exciting new take on one of its most beloved beers, HopDevil IPA. Packed with all the same great juicy whole flower American hops as its brother, WildDevil undergoes a unique fermentation process transforming it into an original experience of floral hop splendor and funky, tart flavor overtones.

Victory Brewing Company created WildDevil, intrigued by the interplay of Belgian fermentation and American hops, and driven by the belief loyal HopDevil drinkers were ready for a new take on their popular, core brand classic. The Victory team of brewers crossed the traditional spiciness of American hops with the tart fermentation aspects of brettanomyces, often referred to as “wild yeast”. With one simple change, everything takes a turn for a unique and deliciously wild brew. The result is floral, aromatic hops paired with kicked up notes of citrus and pine to create a flavor profile not unlike a tart cherry pie.

WildDevil IPA, with an ABV of 6.7%, is available at craft beer bars, bottle shops, beer distributors and major gourmet grocery stores including Whole Foods and Wegmans, throughout Victory’s 34 state distribution footprint, with a suggested retail price of $9.00 and will be sold in 750 mL caged and corked bottles. Use Victory’s Beerfinder to discover a nearby location, or download the free Victory Mobile app for Android or iPhone.

“We’re excited for our fans to try WildDevil, because it showcases how creative our brewing team can be by making a slight change to a fan favorite,” said President and Brewmaster, Bill Covaleski. “We intersected the juicy, spicy flavor of American hops with the tart woody, tannic fermentation character of brettanomyces to create this unique, bold flavor. I recommend trying WildDevil and HopDevil side-by-side to really illustrate the difference one tweak in the brewing process can make.”

Victory Brewing Company is a craft brewery headquartered in Downingtown, Pennsylvania. Founded by childhood friends, Bill Covaleski and Ron Barchet, who met on a school bus in 1973, Victory officially opened its doors in February of 1996. In addition to the original Downingtown brewery and brewpub, Victory recently opened a second state-of-the-art brewery in Parkesburg, PA to expand production capabilities and serve fans of fully flavored beers in 34 states with innovative beers melding European ingredients and technology with American creativity. To learn more about Victory Brewing Company visit us on the web at http://www.victorybeer.com.