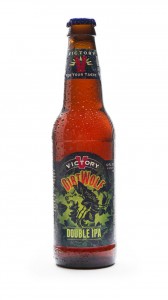 DOWNINGTOWN, PA, — Victory┬« Brewing Company (Victory) is pleased to announce the first in its series of new arrivals, DirtWolf Double IPA. The newest beer in Victory’s brand lineup is part of the brewery’s initiative to increase beer production to meet customer demand, in addition to offering a greater variety of styles and brands, a practice celebrated by the craft brewing industry and its loyal consumers.

Hitting shelves and dining establishments beginning this week, the suggested retail price for DirtWolf Double IPA is approximately $9.99, depending on location; this brand marks the brewery’s first foray into the four-pack market. Known for melding traditional styles and unique concepts to produce the highest quality, full flavored beers, Victory’s DirtWolf Double IPA continues the brewery’s standard of innovation and excellence.

“We’re very proud to bring this delicious new double IPA, DirtWolf to market,” said President and Brewmaster, Bill Covaleski. “As brewers who enjoy experimenting with beer styles and ingredient varieties, we are constantly looking to keep our core audience captivated and interested while creating opportunities to attract and introduce those new to the craft brewing movement. We think, and hope, everyone will be as pleased as we are with the result.”

DirtWolf Double IPA is available for purchase in most major gourmet grocery stores, bottle shops and beer distributors, as well as many craft beer bars throughout Victory’s national distribution footprint, including most Whole Foods Markets and Wegmans locations along the East Coast. Use Victory’s Beerfinder at www.victorybeer.com/beerfinder to discover a nearby location, or download the free Victory Mobile app for Android or iPhone.

Victory Brewing Company is a privately held craft brewery headquartered in Downingtown, Pennsylvania. Founded by Bill Covaleski and Ron Barchet, childhood friends who met on a school bus in 1973, the brewery formally began operations in February of 1996. Victory, Pennsylvania’s widely acclaimed brewery and restaurant, now serves fans of fully flavored beers in 30 states with innovative beers melding European ingredients and technology with American creativity. To learn more about Victory Brewing Company visit us on the web at www.victorybeer.com.