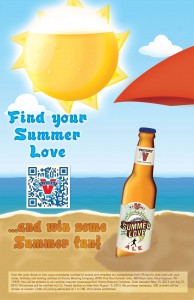 DOWNINGTOWN, PA — Beginning in early May, consumers won’t have to look far to “Find their Summer Love,” as Victory Brewing Company’s crowd-pleasing summer seasonal brew, Summer Love Ale, spreads from the City of Brotherly Love to more shelves across the country.

Originally commissioned in 2010 to capture the essence of Philadelphia, a city rich in history and flavor, Summer Love Ale has come to represent the nostalgia of summer in all 29 states and the District of Columbia that make up Victory’s national distribution footprint. Released nationally in bottles for the second year, beer aficionados should enjoy seeing this refreshing and flavorful golden ale in more locations, including better supermarkets, as the fan-favorite brand will see deeper distribution than ever before in 2013.

At 5.2% alcohol by volume, Summer Love Ale promises the sublime, earthy familiarity of noble European hops backed up by fresh, clean German malts, and a surprising burst of lemony refreshment from fistfuls of American whole flower hops at its finish.

About the “Find Your Summer Love” Sweepstakes:

Also returning in May of 2013 is the “Find Your Summer Love” sweepstakes. By simply scanning a QR code found on select Summer Love Ale posters and coasters, Victory lovers within the general public in participating states will be entered to win summer-inspired giveaways from Victory Brewing Company. More than 500 winners will be selected randomly over the course of the summer. Prizes will include summer-themed gear like lip balm, beach balls and more.

The fine print:
Anyone may scan the code and complete the information required to enter. In order to comply with a myriad of state regulations, this contest will be voided where prohibited. No purchase is necessary. Alternative methods for entering include visiting www.victorybeer.com/fysl or sending a note card with name, birthday and mailing address to Victory Brewing Company, ATTN: Find Your Summer Love, 420 Acorn Lane, Downingtown, PA 19335.