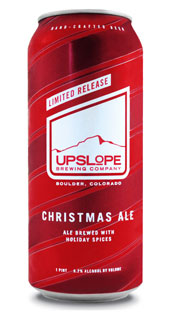 BOULDER, CO – Just in time for the snow to pile up on the high peaks, Upslope Brewing Company releases its highly anticipated Christmas Ale on November 1, 2012. This Spiced Belgian-Style Dubbel is the fourth installment in their Limited Release Series and will be the brewery’s second 16 oz can four pack.

“The recipe for this beer is based upon an old homebrew recipe of mine that I use to take to Christmas parties”, says Matt Cutter, Upslope’s Founder. “In 2009, the brewery adopted this as our Christmas Ale. It was always a spiced holiday ale but last year Alex Violette, Upslope’s Head Brewer, decided to Belgianize this beer by fermenting it with Abbey Ale Yeast.”

This beer pours ruby red with a thick off-white headstand that laces the glass with every sip. The aroma of the Upslope blend of holiday spices complements the dark fruit and spicy notes from the Abbey Ale Yeast. These notes then carry through to the flavor of this medium bodied ale.

The gift of Upslope Christmas Ale will already be “pre-wrapped” on the shelf in a distinctive red ribbon-striped 16 oz can and available on a limited basis throughout Colorado during the holiday season.