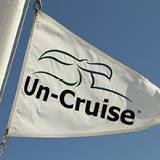 Craft beer theme cruises are set for October 4, 2014, April 25 and October 3, 2015 and April 30, 2016. Kendall Jones and Kim Sharpe Jones, authorities on the Seattle craft beer scene and media partners for the Washington Beer Commission, join the October 4 departure as guest hosts. Robyn Schumacher, an owner and brewer at Stoup Brewing in Seattle, joins the April 25 cruise. Guest hosts for the remaining two dates will be announced later.

“Whether you are a beer lover or a novice, you’re sure to learn and enjoy the expertise of our guest hosts on board,” said Captain Dan Blanchard, CEO. “After a day of kayaking and hiking, relax on the top deck for a hosted beer tasting featuring Washington state micro-brews.”

Guests will enjoy nightly happy hour tastings of select craft beer from nearby breweries—most unavailable outside the state —presentations, and beer recommendations matching the evening’s dinner menu. A brewery tour and tasting will be offered at both Port Townsend Brewing in Port Townsend and Island Hoppin Brewery on Orcas Island. A Sucia Island beach bonfire on the last night sets the stage for a session on Beach Beers and the virtues of craft beer in aluminum cans.

Un-Cruise Adventures’ fleet of eight vessels carries 22-88 guests on adventures in Alaska, Hawaiian Islands, Mexico’s Sea of Cortés, Columbia & Snake Rivers, and Coastal Washington & British Columbia. Un-Cruise Adventures, under the parent company of InnerSea Discoveries Alaska Inc., is a member of Trusted Adventures, dedicated to the highest standards of small-group travel and to giving back to the places visited.