Salt Lake City’s Uinta Brewing Company is headed for a milestone moment as the brewery looks to eclipse the 100,000 barrel threshold this year.

“We’re on a growth track for the high teens,” Uinta CEO Steve Mills told Brewbound during a recent interview.

Uinta, ranked as the 39th largest U.S. craft brewery by trade group the Brewers Association, has nearly doubled its production since 2012. Last year, the company sold 86,705 barrels of beer, up six percent over 2015.

Mills said the bulk of last year’s growth came in the second half of the year, and he credited at least part of it to a new management team, a restructuring of the company’s sales department and a rebranding effort.

“Everything has really started to click for us,” he said.

Sales of Uinta products are up 10 percent in its largest market and home state of Utah, Mills said. But the company is also growing in other parts of the country, including the Pacific Northwest, Georgia, Minnesota, Colorado, Missouri and Arizona.

Ragonese credited a mid-2016 packaging refresh that more prominently displayed the Uinta logo on bottles and cans with increasing brand awareness as well as sales. Another big driver of the company’s growth has been increased consumer and wholesaler demand for cans.

“No doubt about, cans are driving our growth,” Mills said. “Our cans are up 50 percent over last year. It is, to date, our No. 1 selling packed item.”

As a result, the company is now exploring larger format packages — including 16 oz. and 19.2 oz. single-serve cans — as well as bigger pack configurations, including 15-packs, Mills said.

“We’re not going to do anything this year,” Mills said, “but we’re interested in that.”

Mills and Ragonese also pointed to the introduction of new brands with helping to drive growth. Two new products — Hop Nosh Tangerine and Lime Pils lager — are competing for the no. 2 spot in the company’s portfolio. Mills, citing total sales data from market research firm IRI Worldwide, said the two beers have been “neck and neck” over the last four weeks.

To capitalize on the success of the Hop Nosh label, Mills said a third offering brewed with grapefruit is currently being developed.

“We’ve had a lot of consumer interest in that,” Mills said, “and we plan to give it to them.”

In addition to developing new brands, the company has also worked to broaden its distribution footprint in recent months. And before the end of the year, Mills said he expects Unita products to be sold in 45 states.

“This is a big bite,” Mills said, adding that he’s he’s unsure when the company will add the final five states — Nebraska, North Dakota, South Dakota, Alaska and West Virginia. 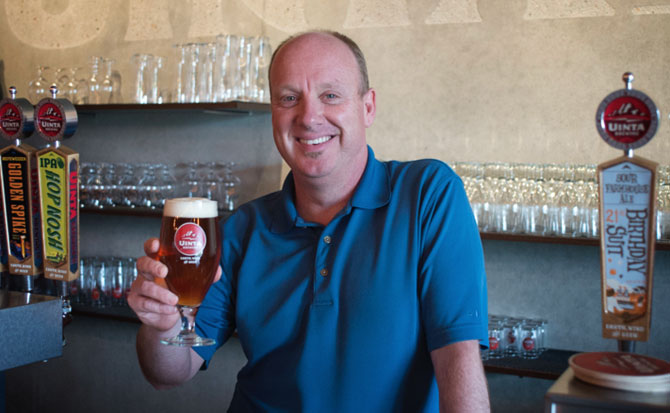 The foray into six new states has also coincided with an expansion of its sales team, which has grown from 14 representatives to more than 30 over the last two years.

However, a key part of that team, longtime vice president of sales Steve Kuftinec, left his day-to-day role with the company two weeks ago to launch a craft distillery, Highway 101 Spirits, in the San Diego region.

Kuftinec will remain an advisor and Uinta board member; the company is currently interviewing potential replacements.

Nevertheless, Uinta made an essential hire in March, with the addition of Tanael Escartin as brewmaster. Escartin had most recently served as the director of brewing operations for Palmetto Brewing Co. in Charleston, South Carolina. She previously held brewing positions at Venezuela-based Empresas Polar over a 15-year career.

Despite only being with the company for three months, Escartin has already began working on critical process improvements and examining existing recipes, Mills said. He recalled his first meeting with her, in which she outlined several areas in which the brewery could improve.

“It was a very long list,” Mills said. “And I’m like, ‘How do you sequence it? Where do you begin?’ And she had the road map already. The team really embraced it, and embraced her.”

Meanwhile, Uinta will soon find itself doing a significant amount of business in a state with the toughest DUI law on the books. In March, Utah Governor Gary Herbert signed a bill lowering the state’s DUI threshold for intoxication from .08 to .05 (BAC). The law is slated to go into effect on December 30, 2018.

Uinta currently has two beer portfolios, including one with offerings specifically designed to meet a state law stipulating that draft beer check in below four percent ABV. Additionally, the state requires all beer above 4 percent ABV to be sold by state-operated liquor stores.

“We’ve always had laws that are slightly different than most of the other states,” Mills said. “We’ve all built our businesses based on that — this is our normal. This is what we do.”

“My personal opinion is that it’s going to have an impact on happy hour because if you’re a 120 pound woman, really, essentially maybe you can have a 4 percent beer with food and still legally operate a vehicle,” he said. “Who’s going to stop for happy hour to have one beer? Then you have to deal with your car if you decide to have more than that. I think people will just go home. Or they’ll go park their car and Uber back.”

“There’s not a viable way for enforcement to pick out a difference between .05 and .08 as people are consuming responsibly,” he said. “So it’s really a challenge.”