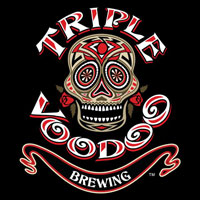 San Francisco, CA — Triple Voodoo launched in February 2011 during San Francisco Beer Week as gypsy brewers. For the next three years we bounced around the bay area brewing our beer at any brewery that had excess capacity. Fast forward to August 2014 and we have brewed 32 batches and released 18 new styles on our new 10 BBL brew house in the Dog Patch neighborhood of San Francisco.

Triple Voodoo Brewery and Tap Room, located in San Francisco’s Dog Patch neighborhood, is celebrating six months of brewing and serving beer. We have shifted our focus from large batches of core beer styles to smaller batch experimental beers. We have expanded our beer portfolio with new Belgian style beers, such as Campine Belgian Red and “Say Hey” Saison, and added more tradition west coast styles to our line up, like our Anarchy IPA. Our tasting room features 16 rotating taps, taster flights, growler fills, food service from local restaurants, and is open seven days a week to the public.

So what’s next? Friday August 29th we will be releasing the first cask beer in our tasting room. We plan to do “tasting room only” cask releases on a regular basis. Our barrel aging program has started and now have beer in bourbon, red wine, and white wine barrels. Triple Voodoo is also planning to resume bottling with a limited runs of bottle conditioned beers. Look for our first bottle release before the end of the year.

The last six months have been a lot of fun and we are looking forward to the next six. Come down to the tasting room and visit us.