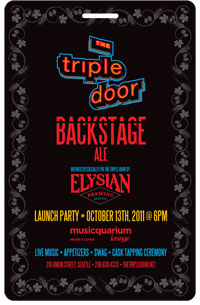 In creating the recipe for this new brew, a team of key members from both The Triple Door and Elysian Brewing Company collaborated to create a recipe that pairs with The Triple Door menu, which features the award-winning and fiercely authentic Pan-Asian dishes of Wild Ginger.

“When we initially developed the concept of a private label craft beer with the team from The Elysian Brewing Company, we were very excited about the prospect of creating our very own craft beer recipe that could perfectly suit the flavors found in our cuisine,” said Jason Lock, general manager of The Triple Door. “We take great pride in crafting our cocktail, wine and beer offerings to provide our guests a variety of options that pair well with our menu — this provides the ultimate opportunity to deliver on this goal.”

Described as a refreshing golden pale ale, this beer will stay true to Northwest craft brewing by incorporating a lively hop profile. Unique flavoring and aromatic elements will be created by an uncommon Japanese hop, Sorachi Ace, that provides citrus and tropical notes, and for an additional twist, the use of juniper provides another intriguing flavor and aromatic layer. It will retail for $5.50 a pint plus tax.