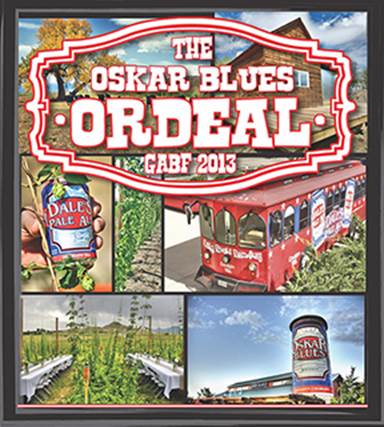 For the third year in a row, Oskar Blues Brewery is offering “Oskar Blues Ordeal” bus trips during Great American Beer Festival week. Ordealers get special behind-the-scenes adventures at all of our OB party spots—and, of course, lots of great craft beer and amazing nosh.

The OB trolley will pick you up outside of the Falling Rock Tap House in Denver and take you to our digs in Longmont and Lyons. We’ll even get all ColoRADo on ya at our Hops and Heifers Farm. Each Ordeal includes classic and specialty Oskar Blues beers all day, and off-the charts barbecue and Americana meals throughout the day.

Here are the deets for each day:

Wednesday, October 9 – $100 round-trip ticket
Oskar Blues Ordeal and Hops and Heifers Barn Burner Pig Roast — 11 a.m. — 9 p.m.
The Ordeal kicks off Wednesday with Ten FIDY Handshakes at the newest Oskar Blues restaurant, CHUBurger. From there, we’re serving up a Cajun-style lunch at Oskar Blues Homemade Liquids and Solids and buying you two 10 oz. Oskar Blues beers, but feel free to try any of the 43 craft beers on draft. A backstage tour of Oskar Blues Brewery and more beers will happen at the Tasty Weasel tap room, then it’s time for the main event. To kick off the Great American Beer Festival in style, we’re throwing a Barn Burner and Pig Roast at the Hops and Heifers Farm that will include live music, plenty of food, specialty beers, a bonfire and ridiculously awesome views of the Flatirons from 5-8 p.m. Wednesday’s Ordeal starts at 11 a.m., and we’ll drop you back outside of the Falling Rock Tap House at 9 p.m.

Thursday, October 10 – $75 round trip-ticket
Oskar Blues Ordeal Tour — 8 a.m. — 4 p.m.
We’re hitting all the Oskar Blues stops on Thursday, and starting the tour off at our Grill & Brew brewpub in Lyons, the place where our beer began. Enjoy Steak and Egg Breakfast Burritos and our specialty Coffee Stout (the breakfast of champions) and we’ll show you around the original Oskar Blues Brewery where we’re still pumping out specialty OB brews and our B. Stiff & Sons craft root beer. 19.2 oz. cans of Dale’s Pale Ale and Mama’s Little Yella Pils will quench your thirst as we next give you a tour around Hops and Heifers Farm. Then a barbecue lunch and a cold Oskar Blues beer at Homemade Liquids and Solids Restaurant is on tap, and we’re rounding out the trip with a VIP tour of the Oskar Blues Brewery before we shuttle you back to the Falling Rock Tap House just in time to hit the first session of the GABF.

Friday, October 11 – $100 round-trip ticket
Oskar Blues Ordeal and Gospel Brunch — 8 a.m. — 4 p.m.
Back by popular demand, the highly praised Gospel Brunch, held in the hop rows at our Hops and Heifers Farm, is the first stop on the Friday Ordeal. Confess your sins to our preacher and get down to a Southern-style brunch paired with specialty Oskar Blues beers and some soul-saving live music. Grab a beer and check out the 43 craft beers on draft at Homemade Liquids and Solids next, and finish the trip with a VIP brewery tour of the Oskar Blues Brewery and Tasty Weasel Tap Room. We’ll get you back to the Falling Rock Tap House with enough time to catch your breath and make it over to the Convention Center.

Founded by Dale Katechis in 1997 as a brewpub and grill, Oskar Blues Brewery launched its craft-brewed beer canning operations in 2002 in Lyons, Colo. It was the first American craft brewery to brew and hand-can its beer. Today there are more than 200 craft breweries canning beer. The original crew used a hand-canning line on a tabletop machine that sealed one can at a time. Oskar Blues Brewery in Longmont packaged 59,000 in 2011 and grew to 85,750 in 2012 while opening an additional brewery in Brevard, NC, in late 2012.