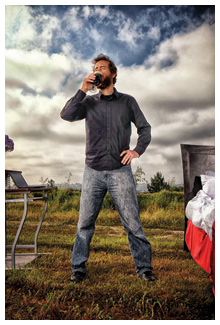 Recently, Greg Koch, introvert, has held a book tour, where the Stone Brewing Co. CEO has been known to stand atop a barstool with a megaphone, shouting this rallying cry:

“If you are with me in sending the message to the man that says ‘no longer – no longer will we put up with fizzy yellow beer’ can I get a hell yeah?!?”

After that, Greg Koch, introvert, jumps into the assemblage, crowd-surfing across the outstretched arms of a few of his loyal customers.

Here’s more introversion: search for Greg Koch on Google, and you find hundreds of on-camera interviews, speeches to aspiring entrepreneurs, and a keynote presentation to more than 1700 brewers at the 2009 Craft Brewers Conference. You’ll find him walking across the stage to receive an Ernst & Young Entrepreneur of the Year award. You’ll find him dragging his comrades-in-arms together to produce the much-viewed “I am a Craft Brewer” video. You’ll find him promoting his history of Stone Brewery, The Craft of Stone Brewing Co., by actually waving oversized signs on a busy street corner in San Diego. You’ll find him on the cover of this magazine, downing a beer where Stone has broken ground for a hotel.

Okay. For the moment, we’ll take the man at his word, that he’s just using this bombastic character to overcome his own shyness. Why does he even need the act? Particularly at a time when so many in the beer industry are watching every move that Koch and Stone make, as the company has become something of a standard-bearer in stalwart artisanship, it would seem that it’s something everyone could live without. But Koch downplays it.

“The whole megaphone thing and the bombastic side of me is sheer fun,” Koch says. “It is always just in the moment. I stand on a bar top and give a megaphone speech maybe three minutes a month.”

If that’s the case, if it’s a defense mechanism, it’s understandable. After all, Koch has had to take many stands, both public and private, since he and partner Steve Wagner started Stone in 1996.

“When we were concerned about our very survival, in the beginning, I was very uptight and focused,” he said. “I realized that I might be coming off as an asshole.”

There was plenty to be uptight about. For the first few years, Koch says, the company was “bleeding money,” losing between $10,000 and $40,000 a month, and its refusal to compromise and play the “pricing game” with potential retailers wasn’t winning it many friends. The potential cost savings of contract brewing were off the table. And then there are the beers themselves, like highly hopped versions of Stone Pale Ale and the eventual Arrogant Bastard Ale, the company’s best known release that stood in direct contrast to the typical mass-produced beer he rails against.

“I’ve always considered us to be a philosophy based company,” Koch says. “It’s not like we predicted the future. We just started with a very simple matrix of what we would and wouldn’t do.” 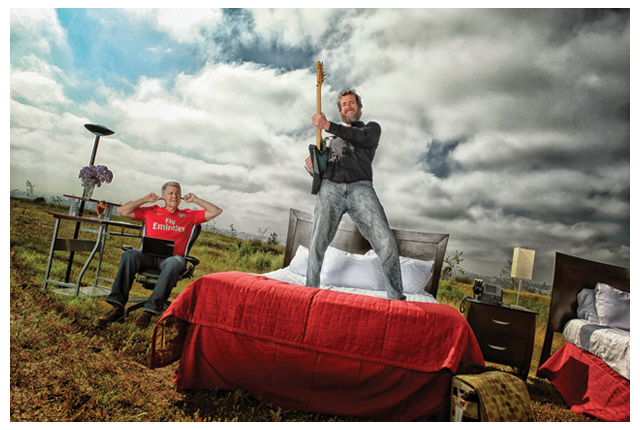 Eventually, there was some payoff, although it wasn’t without its hairy moments.

Koch recalls his first meeting with a buyer for Safeway, North America’s second-largest supermarket chain, in 1998. The buyer was baffled when Koch said he wouldn’t be offering any promotional pricing in exchange for shelf space.

“When I left that meeting, I was pretty certain that we were s—t out of luck,” he said.

A few weeks later, an order came across Koch’s desk, no doubt a nod to his steadfast refusal to play the price war.

“We’ve had a lot of pressure to price discount over the years and we never have,” Koch said. “Our job isn’t to discount, but to make sure that our beer is worth the price from a consumer and retailer perspective.”

And as with many craft beer companies, more and more people are starting to think Stone offerings are worth the price.

Stone, currently ranked as the 11th largest craft brewery in the country, according to the brewers association, is unique not just for its beer and its CEO, but also because it operates in every tier of the beer industry. The brewery produced 148,000 barrels of beer in 2011; its distribution arm sells 34 craft brands throughout Southern California. Stone’s restaurant is known for serving up some of the best locally-sourced, organic food in all of San Diego — while running competing beers through its taps.

And it’s working: last year, the Stone operation pulled in $84 million in revenue, according to Koch.

But Koch and company want more. Stone is investing more than $50 million into an expansion that includes an additional 250,000 barrels of capacity, a new 400-seat restaurant and experimental brewhouse, and even a 50-room hotel. And that’s just domestically. The company also has plans to open a European brewery, as well.

That combination of ambition and principle, as well as the less-than-introverted bar act, however, has at times reflected negatively on Koch himself. 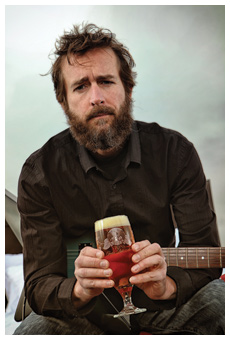 After the announcement that the company was headed to Europe, for example, one person wrote in an online chat “I admire his gumption but I am incredibly leery of his arrogance.”

If that was an isolated remark, it would be one thing, but online conversations on various beer blogs — the preferred mode of communication for much of the craft beer movement — are littered with stuff about Koch, who has been called everything from a “finger wager” to a “jerk-off.”

Even worse, at times Koch has wandered into the comment section after these detractors, whom he derides as “the one percent.”

“I don’t like it when one percent of the crowd controls the conversation,” Koch says. “It’s not a reflection of me when a couple of people have been cranky on a blog. It’s a reflection of them.”

So then why respond?

“Every once in a while I try to disarm it, which maybe is a foolish hope” he said. “Sometimes people treat me like I’m not a person, but then they go off talking about me publicly on a blog. I sometimes will respond because I am a passionate guy and I believe in what we are doing.”

So there you have it — if, in fact, Koch is actually an introvert, he has reason to have to sometimes take on the guise of something else. Even if the company is founded on the principal of making beer that is truthful in origin and process, sometimes the defender needs to come from a murkier place. At times, passion has to trump introversion, turning the introvert outward, revealing the strong value system that lies within.

Given the results, it certainly justifies the occasional shout-out. Even from a megaphone.

Editor’s note: This article appeared in the April/May Issue of BevNET Magazine.