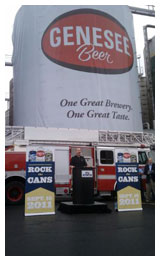 ROCHESTER, N.Y – What started as a one-day event last year, just got bigger. The Genesee Brewery will present two evenings of events on Friday, September 16 and Saturday, September 17.

Guests will receive free samples of a variety of Zweigle’s sausages, Dundee Oktoberfest and other Dundee beers, courtesy of presenting sponsors, Zweigle’s and the Genesee Brewery. Both events end at 10 p.m. on their respective nights.

“We’re excited to party with Rochester and offer two days of music and fun in Genny’s hometown,” said Matt Goldman, channel marketing manager for the Genesee Brewery. “Rochester has embraced our beer, and as we grow all over the country, it’s important that people locally continue to drink Genesee, Genny Light, Genesee Cream Ale and Dundee Ales & Lagers.”

“Rock the Cans is a ticketed event, and proceeds from the sale of Genesee t-shirts on-site, benefit the Rochester Firefighters’ Benevolent Association. On Saturday, there is no admission fee for ROCtoberfest. It’s our way of nodding to the pride and confidence Rochestarians continue to have in their hometown brewery. We hope crowds of people show up to celebrate with us,” added Goldman.

About “Rock the Cans”: Friday, September 16 from 4 to 10 p.m.
“Rock the Cans” features seven rock bands, including newly added Puddle of Mudd, who consistently tops the rock Billboard charts nationally. The bands start taking the stage at 4:15 p.m. on Friday. Here is the line-up:

In keeping with the ‘Rock the Cans’ charitable tradition, the concert will serve as a benefit for the Rochester Firefighters’ Benevolent Association (RFBA). This group of dedicated men and women is comprised of current and past City of Rochesterfirefighters. The RFBA is a not-for-profit organization that supports firefighters and their families in times of need. Volunteers from RFBA will be staffing the Brewery merchandise booth, where concertgoers can purchase Genesee Brewery gear. Proceeds from t-shirt and other merchandise sales will go directly to the Rochester Firefighters’ Benevolent Association.

Ticket Information
General admission tickets to the ‘Rock the Cans’ concert are $29.50 and can be purchased online and via phone through Ticketfly (www.ticketfly.com, 1-877-4-FLY-TIX), and at all Ticketmaster locations. Tickets are also available locally in Rochesterat Aaron’s Alley (622 Monroe Ave), the House of Guitars (645 Titus Ave) and at the Will Call booth on show night. The concert’s radio partner, 94.1 FM The Zone is also giving away free tickets to listeners every day until September 16.

About “ROCtoberfest”: Saturday, September 17 from 5 to 10 p.m.
ROCtoberfest — the Genesee Brewery’s version of an Oktoberfest — will feature local bands: Tommy Brunett, Catch 22 and The Tombstone Hands and a variety of beer and food, including a free beer and sausage pairing event led by Dundee brewersbetween 5 and 6 p.m. The brewers will talk about the brewing process, share tasting notes and give people a first taste of Dundee’s newly released fall brews in addition to Oktoberfest, IPA and beers in the fall variety pack. Other North American Breweries’ products, including the Genesee family of beers, the Original Honey Brown Lager, Labatt Blue Light Lime, Imperial, Seagram’s Escapes and new flavors of Seagram’s Smooth will be available for purchase. There is no admission fee for ROCtoberfest. The event is open to adults who are 21 years of age or older. Proper identification is required for admission.

“The Genesee Brewery was founded in 1878, and Zweigle’s began operating in 1880–enjoying both have become authenticRochester traditions. ROCtoberfest brings two hometown favorites together in a fun atmosphere with great local music,” saidJim Vacanti, Sales Manager, Zweigle’s. “We’re excited to be part of the inaugural ROCtoberfest and we hope this is the start of a new Rochester tradition.

The Genesee Brewery will partner with Designated Drivers Across America (DDAA) to promote safe and responsible consumption of its products. DDAA, which celebrated its three-year anniversary of its successful operation in Buffalo, NY, recently expanded to Rochester. DDAA offers a unique alternative to a cab. DDAA will bring a patron and his or her car home providing a “no excuses solution to drinking and driving,” according to Michael Mule, CEO, DDAA.

“We’re excited to team up with the Brewery and expand awareness of DDAA in Rochester,” said Mule. “DDAA brings you and your car home safely, eliminating one of the largest deterrents to taking a cab — having to leave your car after a night out.” DDAA will have an information table at ‘Rock the Cans’ and ‘ROCtoberfest’ to educate attendees about the service. More information about DDAA Rochester is available at www.ddorny.com.

“‘Rock the Cans’ and ‘ROCtoberfest’ make for a full weekend of great brewery events — there’s something for everyone,” said Goldman. “We’ve got two days of music, food, fun, and of course, great beer — right in the heart of downtown Rochester, at the Genesee Brewery.”