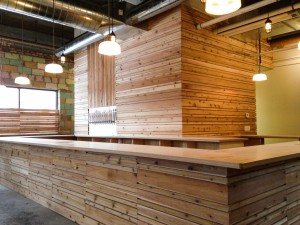 EVANSTON, IL — Temperance Beer Company, Evanston’s first craft brewery, will debut its Tap Room on Friday, December 20, giving beer enthusiasts an opportunity to drink one of the brewery’s unique offerings within feet of where it’s brewed.

Located at 2000 Dempster St., the 2,000-square-foot Tap Room was designed by brewery founder and architect, Josh Gilbert, who is also an Evanston resident. The post-war building’s warehouse history was preserved through retaining the existing masonry walls, while the tap room’s bar exudes a modern, welcoming feel. Next spring, guests can take advantage of an urban beer garden on-site.

“The Tap Room has been part of the plan for Temperance since the earliest imaginings, and I’m thrilled that we are now able to welcome people into our brewery to share some great times together,” said Gilbert.

Opening night, hungry guests can snack on menu items like jerky from nearby Gunslinger Jerky Co., bread made from the brewery’s own spent grains from Evanston’s Hewn, and hot offerings from Hummingbird Kitchen, a food truck based in Evanston. In addition, Chicago’s Popcorn Asylum is working on a proprietary blend of gourmet popcorn for early 2014. Future collaborations with local food artisans are in the works. Guests can also order in food from nearby delivery establishments, and the brewery has plans to host food trucks seasonally.

What’s On Tap
Under the direction of head “Brewster” Claudia Jendron, previously a brewer for Chicago’s Goose Island Beer Co., teases out a bit of the unexpected—in ingredients, form and flavors. For opening night, here’s what will be on draft at the Tap Room:

Down the road, the Tap Room will feature exclusive pourings that won’t be available elsewhere. The Tap Room is open 7:30 — 11 p.m. opening night and 4 — 11 p.m. the next day. No tickets are required for entrance.

About Temperance Beer Company
Temperance Beer Company began in 2013 with a quest to bring beer to Evanston, Ill., later becoming the historically dry city’s first craft brewery. The brainchild of an architect, founder Josh Gilbert, who met his match in a former marine biologist, head brewster Claudia Jendron, Temperance beers are memorable, eclectic and delicious. Visit Temperance at its Tap Room at 2000 Dempster St. or find it in fine establishments across Chicagoland. For more information, visit &lt;a style=”color: purple;” href=”http://www.temperancebeer.com/” target=”_blank”&gt;www.temperancebeer.com, &lt;a style=”color: purple;” href=”https://www.facebook.com/TemperanceBeer” target=”_blank”&gt;like us on Facebook or follow us on Twitter at @temperancebeer or Instagram at @temperancebeer.