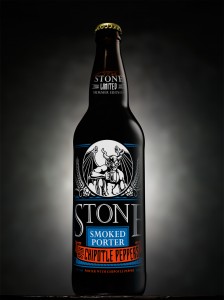 ESCONDIDO, CA — New and improved ideas are sometimes created by taking a well-established, solid concept and introducing a unique feature. This is true of the latest release from Stone Brewing Co.: Stone Smoked Porter w/Chipotle Peppers. Back in 2006, Stone added a spicy twist to a classic, year-round brew by way of chipotle peppers. Since then, the beer has been a cult hit for many, including Stone’s pepper-loving CEO and Co-founder, Greg Koch. Beginning today, the beer is available in 22-ounce bottles and on draft at retailers, restaurants and bars in select markets nationwide.

Stone Smoked Porter w/Chipotle Peppers was conceived as an idea from a long-time member of Team Stone, Chris Carroll, who proposed the brewing team make a spicy one-off beer as a special Cinco de Mayo cask. Its origin was rather serendipitous, since at the time, a former Stone brewer had recently returned from a trip to Oaxaca, Mexico, and brought back chipotle peppers to use on a special beer creation. Originally dubbed “South of the Border Stone Smoked Porter,” the resulting brew brought forth an incredible blend of roastiness, smokiness, and just a touch of heat from the peppers.

“After Chris pitched his idea, we gave it a shot by making cask-conditioned batches of the beer to be served as a special offering at Stone Company Store – Escondido,” explains Stone Brewmaster Mitch Steele. “By melding Stone Smoked Porter with chipotle peppers, we found the chilies provided an enhanced roast flavor and perfect complement to the peat-smoked malt. There is a subtle taste of heat in the finish that balances well with the coffee and cocoa flavors found in the base beer.”

To fully relish the mild pepper bite and peat-smoked barley qualities of the beer, fans should consume it fresh or within 120 days from the “bottled on” date.