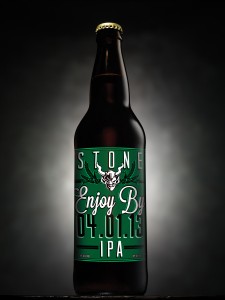 ESCONDIDO, CA (Feb. 15, 2013) — Stone Brewing Co. is unleashing another round of the groundbreaking, devastatingly fresh beer, Stone Enjoy By IPA. Beginning February 22, Stone Enjoy By 04.01.13 IPA will be bottled and kegged, loaded onto delivery trucks, and headed to Stone fans in 17 states across the nation.

Stone Enjoy By 04.01.13 IPA features a massive hop profile, thanks in part to the 11 different hop varieties added throughout the brewing process. The “Enjoy By” date printed on each bottle reflects the date by which the beer must be consumed. And Stone is making sure it will be! On April 2, if any beer remains on the shelf, it will immediately be removed.

“This is the most ambitious Stone Enjoy By IPA release to date, with the highest number of areas being included in its distribution,” said Stone CEO and co-founder Greg Koch. “Since our first release, we’ve been tallying the votes made via social media and on the Stone Enjoy By IPA website. Texas, Ohio, and Massachusetts all came out as ‘winners’ in previous rounds so we are bringing the beer to these states along with other areas that have also shown us they want beer that’s fresh and full of flavor. Continue to stand up for your right to enjoy devastatingly fresh beer and vote for Stone Enjoy By IPA in your city!”

Where can one locate this incredibly fresh beer? Visit stonebrewing.com/enjoyby/ and use the interactive map to find exactly which retailers, restaurants and bars are carrying the beer in bottles or on draft in select areas. If it looks like Stone Enjoy By 04.01.13 IPA isn’t at a nearby location, don’t fret. Stone will release future rounds of this beer to other markets throughout 2013.

Stone Enjoy By IPA is a groundbreaking way to enjoy beer and changes the way Stone and its distributors are working together to get fresh beer out to the clamoring public. And the public is clamoring. Stone is measuring “buzz” for the beer through the company’s social media channels on Facebook, Twitter, Instagram, and the Stone Enjoy By IPA website. Based on the interactions, Stone has vowed to bring the beer to the locations that voice their interest the most.

Hopheads are encouraged to use the following hashtags on Twitter and Instagram to request the beer’s return to their city, or simply preach the sheer awesomeness of this fresh IPA:

All fan engagements may be viewed in real time at the Stone Enjoy By IPA website, stonebrewing.com/enjoyby/

Twice named “All-Time Top Brewery on Planet Earth” by BeerAdvocate magazine, Stone Brewing Co. was founded in 1996 by Greg Koch and Steve Wagner and is the 11th largest craft brewer in the U.S. Headquartered in Escondido, CA, Stone owns and operates the farm-to-table restaurant Stone Brewing World Bistro & Gardens — Escondido, as well as Stone Catering, Stone Distributing, and Stone Farms. Other lofty ventures include construction of Stone Packaging Hall and a second restaurant with an on-site brewhouse, Stone Brewing World Bistro & Gardens — Liberty Station, both with an estimated completion of first quarter 2013, and Stone Hotel & Headquarters with an estimated completion end of 2014. For more information, please visit stonebrewing.com or on social media sites: Twitter, Facebook, Instagram, Google+, YouTube, and The Stone Blog.