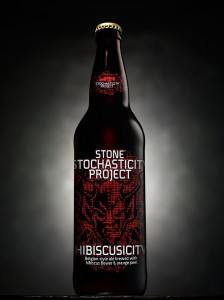 ESCONDIDO, CA — Another unique and nearly unpronounceableStochasticity Project beer will begin arriving in 22-ounce bottles and on draft at retailers, bars and restaurants in select markets nationwide beginning this week. Stochasticity Project Hibiscusicity is a Belgian-style strong ale infused with hibiscus flowers and orange peel.

“On a warm day in San Diego, I was enjoying a glass of a hibiscus-infused beer by Dieu du Ciel! called Rosée d’Hibiscus,” explains Brewmaster Mitch Steele. “I was impressed with its delightfully refreshing qualities and was inspired to create my own recipe utilizing hibiscus. In Stochasticity Project Hibiscusicity, the flower contributes a distinct, naturally tart flavor when added during the brewing process and gives the beer a reddish hue. The addition of orange peel provides a nice burst of citrus that complements the spiciness of the Belgian yeast.”

The recipe for a citrusy, hibiscus-flavored wheat ale that Steele conceived was first brewed on the 10-barrel brewhouse at Stone Brewing World Bistro & Gardens — Liberty Station. Originally named “Going Red,” the beer was a special-release offering to promote awareness of the American Heart Association’s Go Red for Women campaign.

The addition of Magnum and Sterling hops provides a balanced bitterness to the beer’s citrusy, berrylike spiciness, while the malted wheat adds a subtle yet sweet bready flavor to complement the tartness of the hibiscus flowers. Giving the beer tropical fruit and banana characters, the Belgian yeast strain Ardennes was used to complete the unique brew. As a result of this serendipitous combination of ingredients, fans will savor a flavorful beer that is complex, refreshing and easy to drink. Stochasticity Project Hibiscusicity may be enjoyed now or cellared for several months or years.

Appearance: Pours a hazy pink, reddish color with subtle orange hues and a white head.
Aroma: Floral, cranberry and raspberry with hints of citrus and Belgian-yeast spiciness.
Taste: Floral, berries, citrus rind, tropical fruit and a nice note of Belgian yeast on the back end.
Palate: Tart, dry and very refreshing!
Overall: The hibiscus flowers added in the whirlpool contribute so much to this beer: the pink color, the tart flavor, and the intense floral and berry characters. Orange peel adds some notes of tropical fruit flavor, which increases the refreshing quality of this beer.

Founded by Greg Koch and Steve Wagner in 1996, San Diego-based Stone Brewing Co.is the 10th largest craft brewer in the United States. Stone has been listed on the Inc. 500 | 5000 Fastest Growing Private Companies list 10 times, and has been called the “All-time Top Brewery on Planet Earth” by BeerAdvocate magazine twice. The multi-faceted company will be the first American craft brewer to independently own and operate facilities in Berlin, Germany and also has plans to open operations east of the Mississippi. Known for its bold, flavorful and largely hop-centric beers, Stone has earned a reputation for brewing outstanding, unique beers while maintaining an unwavering commitment to sustainability, business ethics, philanthropy and the art of brewing. For more information on Stone Brewing Co., please visit stonebrewing.com or the company’s social media sites:Twitter, Facebook, Instagram, Google+, YouTube, Pinterest and The Stone Blog.