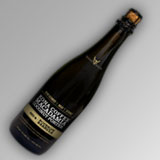 Escondido, CA — Stone Brewing Co. is the brewery that keeps on giving! And it’s all thanks to an extremely loyal and supportive fan base, as well as an amazing team of devoted volunteers and generous vendors.

“Since day one, we’ve made supporting well-deserving charities one of our most important principles,” notes Greg Koch, CEO & co-founder of Stone Brewing Co. “We are dedicated to supporting our community and promoting a culture of social responsibility.”

Stone’s newest series of beers—dubbed “Quingenti Millilitre” for their 500ml cork-finished bottles—began with the release of a very small run of the famed collaboration beer “Ken Schmidt / Maui / Stone Kona Coffee Macadamia Coconut Porter Aged in Bourbon Barrels.” Given the limited number of bottles, a raffle system was devised wherein fans could buy $1 tickets that would enter them in a drawing to win the chance to purchase a bottle. Proceeds from ticket sales were donated to local charities Escondido Creek Conservancy and Interfaith Community Services. 14,798 tickets were sold in all, with Stone topped up the donation to an even $15,000.

In addition to these larger fundraising efforts, there is a seemingly endless list of charity events that Stone happily supports through donations of food and beer, and the most recent “Give a Pint, Get a Pint” blood drive hosted by Stone collected 71 units of blood for the San Diego Blood Bank!