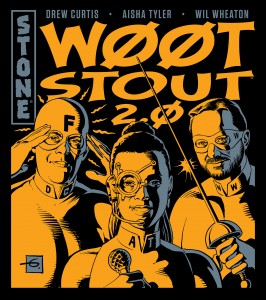 In 2013, Stone CEO and Co-founder Greg Koch invited actor and overall geek idol Wil Wheaton and Fark.com creator Drew Curtis to co-brew a massive yet seductive imperial stout dubbed Drew Curtis/Wil Wheaton/Greg Koch Stone Farking Wheaton w00tstout. With Koch on sabbatical, Curtis called on longtime friend and multitalented actress, comedian, homebrewer and gamer geek Aisha Tyler to join the group of unconventional brewers for this year’s special edition brew. In addition to a new brewer, the collaborators added a new ingredient—stone-ground chocolate—to the beer, augmenting the wheat, rye, pecans, and rich bourbon flavors derived from barrels shipped in from Kentucky. Together, the eclectic trio brewed Stone w00tstout 2.0, which will be available in 22-ounce bottles and on draft at select Southern California retailers, restaurants and bars beginning the week of July 14.

Last year, Hop-Con, a festival of geekery, both craft-beer and standard varieties, was thrown to celebrate the collaboration, and it proved to be an epic blast for guests and worthy of a second episode. Hop-Con 2.0: The w00tstout Launch Festival will be held at Stone Brewing World Bistro & Gardens — Liberty Station (2816 Historic Decatur Road, #116, San Diego, CA 92106) on Wednesday, July 23, from 7 to 10 p.m. Wheaton, Curtis, Tyler and Koch (who will have surfaced from his around-the-world travels), will be in attendance to meet, mingle and rub elbows with fans. Hop-Con 2.0 is about celebrating all things geeky in a relaxed festive atmosphere with great food and awesome craft beer.

Admission to the celebratory fest is $62.06 (including service fee) and may be purchased at brownpapertickets.com/event/680025. Tickets include 10 four-ounce beer samples, a commemorative Hop-Con 2.0 glass, delicious edibles, and a lineup of Stone year-round and specialty brews that will satisfy any beer geek’s (or just plain geek’s) palate. Special beers to be offered include:

For a $30 donation, Dave Gibbons, famed comic artist and co-creator of the “Watchmen” series, will sign a lithographic print of the Stone w00tstout 2.0 label he designed. At the request of the artist, Stone is also donating the label-design commission fees he would have received to The Hero Initiative, a charity organization providing retirement funds for golden-age comic book artists.

For more information about Hop-Con 2.0 or to purchase tickets to the event, visit stonebrewing.com/hop-con/.