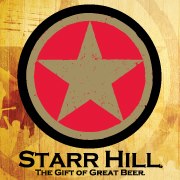 CHARLOTTESVILLE, VA—Starr Hill Brewery, one of the most award-winning craft breweries on the East Coast, won a Bronze Medal in the 2014 United States Open Beer Championship, an international beer competition that evaluates professionally brewed and homebrewed beers from around the world, recognizing the most exceptional brewers and their beers.

The beer championship’s winners were announced July 4, 2014, in Atlanta, Georgia, by judges from the United States, England, Canada and Finland. Starr Hill’s Soul Shine Belgian-Style Pale Ale took home a Bronze Medal in the Out of Bounds Pale Ale category, a category in which judges used only their taste buds and preferences, and thus not standard BJCP guidelines, to determine which ales would medal.

Soul Shine is a Belgian-style pale ale with an American twist. In addition to its 5.2% alcohol by volume, Soul Shine is generously hopped with a blend of American hops, including Falconer’s Flight, Cascade, and Simcoe, to give it a distinct aroma of citrus and tropical fruit. This light-bodied beer has a crisp palate and moderate bitterness with a subtle spicy finish from the Belgian yeast.

“The thirst to create outstanding beers is strong at Starr Hill. We are honored to have won a medal in such a significant competition,” said Mark Thompson, Starr Hill’s Master Brewer and Founder. This year, the championship drew more than 3,000 entries of beer and cider in 81 categories.

“We have a quality-driven, passionate team, and this award recognizes everyone who made this beer possible,” said Robbie O’Cain, Starr Hill’s Manager of Brewery Operations. “This is the first year we’ve brewed Soul Shine Belgian-Style Pale Ale, and it was a huge hit, especially among Starr Hill employees. Starr Hill will always be about high-quality beer.”

Soul Shine Belgian-Style Pale Ale is currently available at retail in six-packs (12-ounce bottles) and kegs (1/6 and 1/2 barrels) through August. It will then be replaced by Boxcarr Pumpkin Porter, Starr Hill’s fall seasonal beer.

Starr Hill Brewery was founded in 1999 by Mark Thompson and Kristin Dolan in Charlottesville, Virginia. Starr Hill is one of the most award-winning craft breweries on the East Coast, having won 21 medals from Great American Beer Festival, World Beer Cup and Great British Beer Festival since its founding. The beer is distributed in ten states, including Virginia, Delaware, Georgia, Maryland, New Jersey, North Carolina, Pennsylvania, Tennessee, and Washington D.C.