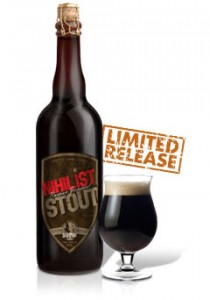 Imperial Stouts were first brewed in England to satisfy the Russian Czar, and this robust version was first brewed to celebrate the 17th anniversary of Sly Fox Brewing Company. The 2012 draft release was so popular we had to put it in a 750ml corked and caged bottleÔÇª our first new 750mL release since Succubus in 2010.

Available in very limited quantities at our two pubs and select retail outlets, Sly Fox Brewing Company’s Nihilist Russian Imperial Stout is a subtle revolution for the comrade in all of us!