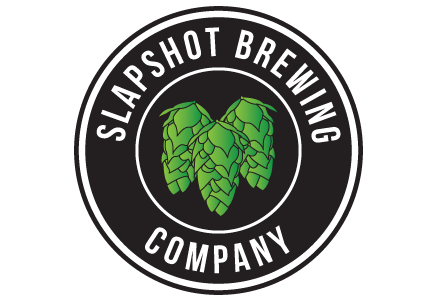 Everything brewed at SlapShot is a reflection of what we personally enjoy drinking, mid-alcohol “session beers”. With session beers typically falling in the 5%ABV range, they’re a perfect match for enjoying a game at the local pub or a backyard BBQ with friends while tossing a frisbee.

SlapShot Brewing began with brothers Brian and Steve Miller homebrewing beer on Steve’s apartment balcony back in 2007. Over the years, the equipment evolved, the recipes gained perfection and the dream was born. In early 2012 the brothers decided to take their brewing to the next level and began formulating the business plan that would outlay the future of SlapShot Brewing. Partnering with the Miller boys, friendsChris Zion and Jeff Schmidt signed on and SlapShot Brewing was ready to become a reality. The decision was made to start small on a 3.5bbl brewhouse and grow steadily by adding equipment over the next few years.

Work progressed on the project, sometimes rapidly, other times painstakingly slow. With the buildout nearing completion, the Little Village based facility will come online within the next 90 days. While awaiting construction SlapShot has arranged contract brewing services from Urban Legend Brewing Co. inWestmont, IL. Through contract brewing we have been able to hit the ground running and begin testing recipes on a system of similar scale. This has also allowed for SlapShot Brewing beer to hit the market onSeptember 7 for a launch party at The Beer Bistro, 1061 W Madison Ave in Chicago.

The first beer to market is Honey, You’re Blonde. This beer is a crisp, refreshing beer brewed with honey malt and cascade hops. Other brews to follow include The White Stuff, a 55IBU hefeweizen as well as Nut Job, a nut brown ale with aromatics and slight flavor of peanut butter. These unique beers embrace everything we at SlapShot Brewing Co. love, unique ingredients, surprising flavors and originality.