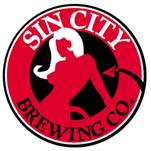 LAS VEGAS — Sin City Brewing Co.’s largest bar and first Strip-front location at Harmon Avenue and Las Vegas Boulevard is now open, offering an intimate yet lively venue for patrons who seek the best of Las Vegas’ craft beer at the heart of the iconic Strip.

The 774-square-foot, walk-in bar features Las Vegas’ own craft beer on tap in six signature styles as well as original Sin City merchandise such as t-shirts, shorts and official suds glassware. It is Sin City’s first venue to serve a variety of premium cocktails, accommodating the preferences of all Las Vegas patrons with an all-day happy hour exclusive to the Harmon Corner location.

“Since opening our first bar in 2005, Sin City has been committed to brewing a superior craft beer for tourists and locals to enjoy,” said Sin City’s Master Brewer Richard Johnson. “Opening this new destination with direct access to The Strip — the most exciting street in the world — we look forward to introducing an even greater audience to the growing craft beer culture in Las Vegas.”

Through years of tutelage from brewing icons Dan Gordon and Dean Biersch, Johnson delivers complex yet clean tastes that celebrate the rich tradition of crafting German-style lagers and English ales. In accordance with the 1516 German Beer Purity Law, Sin City utilizes just four ingredients to create its selection of brews, including:

The Harmon Corner destination marks Sin City’s third bar, joining its other two locations at Miracle Mile Shops and The Grand Canal Shoppes at The Venetian.

Sin City Brewing Co. is a Las Vegas-based craft brewery launched by beer expert Richard Johnson in 2005. Produced to satisfy both the savvy beer drinker and those with a preference for a traditional domestic-style brew, Sin City beers accentuate the indulgent nature of Las Vegas. The beers are brewed in small batches (100 kegs at a time) using premium raw materials and traditional methods that differentiates Sin City beers from the big guys. Sin City beers are brewed and distributed exclusively in Las Vegas. Sin City Brewing Co. also features a popular retail line that is available through its online store and at its branded bars in Miracle Mile Shops, The Grand Canal Shoppes at The Venetian and Harmon Corner. For more information, visit www.sincitybeer.com.