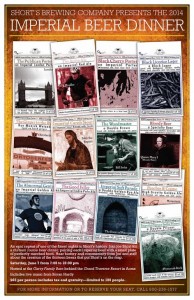 Kalamazoo, MI — During the fall of 2006, Joe began work on Short’s most ambitious project up until that point: The Imperial Beer Seriers. The idea was to make a series of imperial strength beers and to provide a modern spin on the creative use of nontraditional and unusual ingredients used in beer throughout human history. Although Short’s had previously bottled only minimally, this project required all of the 13 beers to be hand filled into 750ML bottles. Each came with its own trading card and story.

This is the re-creation of the Imperial Series Short’s Beer Dinner and will be a rare opportunity to experience a monumental beer and food pairing event in-person with Joe Short and some of the Short’s staff.

This special dinner event provides 13 different food and beer pairings, consisting of 4 oz. pours and small plates. Due to limited space, this event is being limited to 100 Guests (sellout is expected). To book your reservation, call 800-236-1577.