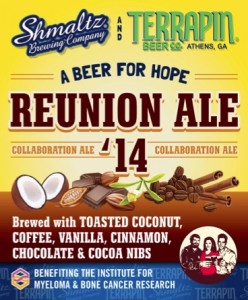 Clifton Park, NY — Shmaltz Brewing Company teams up for the fourth year-in-a-row with Terrapin Beer Company and Alan Shapiro (founder of SBS Imports) to create Reunion Ale ’14: A Beer For Hope┬«, a Dark Imperial Brown Ale Brewed with Toasted Coconut, Vanilla, Cinnamon, Roasted Coffee (from Creekside Café in Burnt Hills, NY) and Cocoa Nibs (from Nashville, TN’s Olive and Sinclair Chocolate Company). A portion of the proceeds from both the sale of Reunion Ale ’14┬« and national fundraising events will be donated directly to The Institute for Myeloma and Bone Cancer Research (IMBCR). In addition to Reunion Fundraising Events occurring across the country this summer and fall, Shmaltz is raffling off 18 three-liter magnums of Reunion Ale ’14┬« (valued at over $100 each) at select special events listed below.

“Once again, IMBCR is excited to partner with Shmaltz and Terrapin as Reunion Ale ’14: A Beer For Hope┬« is nationally launched,” says Geoffrey M. Gee, Executive Director, Institute for Myeloma & Bone Cancer Research. “From IMBCR’s perspective, working with major donors (corporate, foundations and individuals) as well as small businesses and individuals allows us to raise much needed funds and create awareness for our important work. With the support of Reunion 2014┬« — which by the way has always been an exceptional brew — we’ve been able to further our research into multiple myeloma and other cancers, and know that we are moving ever closer to finding a cure. We are confident that 2014 will be a very successful year for both Reunion┬« and IMBCR.”

Reunion┬« is brewed annually in memory of Virginia MacLean, a dedicated cancer research supporter who lost her own battle with Multiple Myeloma in 2007 and a dear friend and co-worker of Alan Shapiro and Pete Slosberg’s (creator of Pete’s Wicked AleÔäó). Thus far, the Reunion project has raised more than $130,000 in Virginia’s name for the IMBCR.

For the first time, brewmaster Brian “Spike” Buckowski, of Terrapin Brewing Co., made a trip to Shmaltz’s new brewery in Clifton Park, NY to take part in the brewing of Reunion Ale ’14┬« alongside Shmaltz’s Brewmaster Paul McErlean. Buckowski comments, “Being part of the Reunion beer project for the last couple of years with Shmaltz has been a creative outlet for us here at Terrapin as well as a rewarding one.” With Terrapin currently under construction and unable to brew their version of Reunion ’14, Shmaltz will exclusively brew and release this year’s collaboration through their extensive nationwide team of wholesalers. Reunion Ale ’14┬« is now available in 22 oz bottles, as well as limited amounts of draft in the nearly 40 U.S. states and in Western Canada through Shmaltz’s distribution network.

Below is a list of Reunion Fundraising Events happening in select cities from August – October 2014, all of which will donate proceeds benefiting The Institute for Myeloma and Bone Cancer Research:

*Wednesday, August 20, 2014 (Reunion Luau Fundraiser @ The Common Market: 1515 S Tryon Street, Charlotte, NC) — Reunion Ale ’14┬« will be on tap as well as other Shmaltz favorites. There might even be a turtle sighting, honoring Terrapin’s collaboration with Shmaltz! Shmaltz raffles off a magnum of Reunion Ale ’14┬«.

*Thursday, August 21, 2014 (Reunion Fundraiser: “Collaboration for a Cause” @ Falling Rock Tap House: 1919 Blake Street, Denver, CO; 5 pm – 8 pm) — Join Shmaltz founder Jeremy Cowan for the first Colorado Reunion Ale ’14┬« fundraiser. A delectable lineup of award-winning brews will be on tap, including Reunion Ale ’13 & ’14┬«, Death of a Contract Brewer Black IPA┬«, and Jewbelation REBORN┬«. Falling Rock will raffle off a selection of rare bottles from their private stash, including a Grand Prize magnum of Reunion Ale ’14┬«. $2 from every pint, plus all money raised in the raffle, will be donated to the IMBCR.

*Friday, August 22, 2014 (Reunion Luau Fundraiser @ Fermental Lounge: 7250 Market Street, Wilmington, NC) — Shmaltz and Terrapin selections will be available as well Reunion Ale ’14┬«. These two standout breweries are back with this year’s Reunion┬«, and this time they’re throwing down at the beach. Fermental will have some tropical grub, and don’t be surprised if you see Shmaltz’s Southeast Sales Rep Greg Lynn in a coconut bra! Shmaltz raffles off a magnum of Reunion Ale ’14┬«.

*Friday, September 5, 2014 (Reunion Raffle Fundraiser @ The Surly Goat: West Hollywood, CA) — Shmaltz raffles off a magnum of Reunion Ale ’14┬«, and members of the IMBCR will be onsite giving a special talk about their research.

*Wednesday, September 10, 2014 (Reunion Raffle Fundraiser @ Good Beer: 422 E 9th Street, NYC) — A six-week raffle fundraiser will draw to a close on Sept. 10, and a winner will be selected among the many who entered for a chance to win a magnum of Reunion Ale ’14┬«. Raffle tickets are $2.

*Wednesday, September 10, 2014 (Reunion Raffle Fundraiser @ Beer Culture: 328 W 45th Street, NYC) — A six-week raffle fundraiser will draw to a close on Sept. 10, and a winner will be selected among the many who entered for a chance to win a magnum of Reunion Ale ’14┬«. Raffle tickets are $2.

*Wednesday, September 10, 2014 (Reunion Raffle Fundraiser @ Top Hops: 94 Orchard Street, NYC) — Join Jeremy Cowan in the fight against cancer with a Shmaltz Tap Takeover. Shmaltz’s six-week raffle fundraiser will draw to a close on Sept. 10, and a winner will be selected among the many who entered for a chance to win a magnum of Reunion Ale ’14┬«. Raffle tickets are $2.