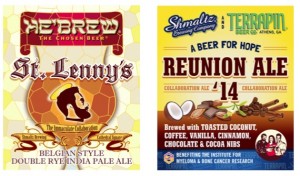 Clifton Park, NY — After recently hosting 17 other breweries for its one-year anniversary bash, Shmaltz Brewing Company continues to embrace collaborations with regional and national partners in summer 2014 with the limited-edition release of two sensational offerings, including the return of St. Lenny’s┬« and a new recipe for Reunion Ale ’14 — A Beer for Hope┬«. Experience the second coming of St. Lenny’s Belgian Style Rye Double India Pale Ale as Shmaltz renews its “Immaculate Collaboration” with Missouri’s Cathedral Square Brewing Company. Shmaltz teams up for the fourth year-in-a-row with Terrapin Beer Company and Alan Shapiro (founder of SBS Imports) to create Reunion Ale ’14, a Dark Imperial Brown Ale Brewed with Toasted Coconut, Cocoa Nibs, Vanilla, Cinnamon and Coffee. A portion of the proceeds from Reunion Ale ’14┬« are donated directly to The Institute for Myeloma and Bone Cancer Research. National fundraising events will occur throughout the summer and fall; events to be announced on Shmaltz’s event calendar at www.shmaltzbrewing.com.

Unlike previous years, this year, Shmaltz will exclusively brew and distribute both collaborations throughout its national wholesaler network. For the first time, both brewmasters Brian Neville, of Cathedral Square Brewing Co. and Brian “Spike” Buckowski, of Terrapin Brewing Co., made a trip to Shmaltz’s new brewery in Clifton Park, NY to take part in the brewing of their collaborative brew. With these exceptional brewers joining forces with Shmaltz’s Brewmaster Paul McErlean and his brewing team, Richie Saunders, Mike Myers and Chris DuFrain, the limited-edition release of St. Lenny’s┬« and Reunion Ale ’14┬« offers a very special summer treat for craft beer enthusiasts around the country.

For its 10th Anniversary in 2006, Shmaltz brewed the first batch of Bittersweet Lenny’s R.I.P.A.┬« to commemorate the 40th anniversary of the death of prophetic Jewish comedian Lenny Bruce. The rye-based double IPA went on to win two Gold medals at the World Beer Championships (2010 & 2011), and it currently holds a 99 Rating with BeerAdvocate beer bros and 98 Rating with RateBeer.com. It’s barrel-aged incarnation, R.I.P.A. on Rye┬« took home Silver medals at both the Great American Beer Festival (2010, Wood & Barrel Aged Strong Beer Category) and National Wood-Aged Beer Competition (2010) — this year’s version of R.I.P.A. on Rye┬« is aged in Willett barrels and is currently on shelves nationwide.

2014 brings the return of “The Immaculate Collaboration” — a labor of personal history and love of beer and shtick between two longtime friends and colleagues from Shmaltz and Cathedral Square. In the true spirit of collaboration, Shmaltz Brewing proprietor Jeremy Cowan went to Missouri this spring to brew with Cathedral Square, who will release their version of St. Jewbelation┬«, a Belgian Style Imperial Dark Rye Ale packaged in 750 cork finished bottles available for limited distribution in Missouri and in the Shmaltz Tasting Room in Upstate, New York. Not long after Cowan’s return from Missouri, Brian Neville boarded a plane for New York to brew the first batch of St. Lenny’s┬« (Belgian Style Rye Double IPA) alongside of the Shmaltz brewing team.

Cathedral Square’s Neville says, “It is one thing to collaborate on a great idea for a beer like St. Lenny’s and talk shtick and punchlines with an old friend. To actually be onsite, in Shmaltz’s new brew house, milling grain, dumping hops and working elbow to elbow with their brewers is something incredible. I had a great time with Jeremy, Brewmaster Paul and the entire Shmaltz Tribe and I’m proud to continue our ‘Immaculate’ Collaboration.”

Cowan adds, “Now with our own brand new brewery, for the first time we have the kind of freedom and the opportunity to do a rare project like this. After a decade of shared brewing connections, I couldn’t be more excited to once again cook up St. Lenny’s with Cathedral Square’s audacious brewmaster Brian Neville. I’m still mad that he stole my thunder by coming up with such exceptional shtick — but can’t wait to share the amazing flavors with our cult of He’brew┬« enthusiasts.”

St. Lenny’s┬« flips the award-winning rye double IPA on its head using a custom Belgian yeast blend (2 Trappist and 1 Abbey) with the original R.I.P.A.┬« recipe. With a spicy punch of rye and caraway, fruity clove and anise flavors, and a gorgeous Belgian character, St. Lenny’s┬« is destined to intrigue hop heads and Belgian beer fans alike.

Shmaltz Brewing proudly joins Terrapin Beer Company and Alan Shapiro (founder of SBS Imports) to participate in brewing Reunion Ale ’14 — A Beer for Hope┬«. Reunion┬« is brewed annually in memory of Virginia MacLean, a dedicated cancer research supporter who lost her own battle with Multiple Myeloma in 2007 and a dear friend and co-worker of Alan Shapiro and Pete Slosberg’s (creator of Pete’s Wicked AleÔäó). As a tribute to Virginia, a portion of the proceeds from Reunion Ale ’14┬« is donated to the Institute for Myeloma & Bone Cancer Research (IMBCR) in Virginia’s name.

While Terrapin is hard at work installing their new brewery in Athens, GA, Shmaltz invited Terrapin Brewmaster Brian “Spike” Buckowski up to the Shmaltz brewery to brew Reunion ’14 with Brewmaster Paul McErlean. Buckowski comments, “Being part of the Reunion beer project for the last couple of years with Shmaltz has been a creative outlet for us here at Terrapin as well as a rewarding one.” Due to the fact that Terrapin is currently under construction and unable to brew their version of Reunion ’14, Shmaltz will exclusively release this year’s collaboration through their extensive nationwide network of wholesalers. Terrapin hopes to jump back into brewing for 2015 when their new expansion is up and running at full throttle.

Reunion Ale ’14┬« is a dark Imperial Brown Ale brewed with toasted coconut, vanilla, cinnamon, roasted coffee from Creekside Café in Burnt Hills, New York and cocoa nibs from Nashville, Tennessee’s Olive and Sinclair Chocolate Company. Following its initial release in 2007, the Reunion project has raised more than $130,000 for the IMBCR through bottle and draft sales of Reunion┬«, retailer fundraising events, and private donations. Beer lovers can also donate money directly through the Reunion website, the Reunion Facebook page, or the IMBCR website.

Reunion Ale ’14┬« will be available in 22 oz bottles, as well as limited amounts of draft in the nearly 40 U.S. states and in Western Canada through Shmaltz’s distribution network.