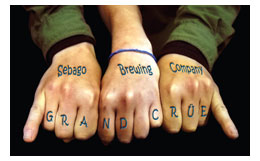 GORHAM, ME – Sebago Brewing Company is pleased to announce the release of their Single Batch Series Beer, 2011 Grand Cr├╝e on Friday July 22.

This beer is a limited release, available while supplies last on drauft and in 22oz bombers to go at all Sebago locations and select beer retailers throughout Maine.

Editor’s note: The draught offerings are delayed but are scheduled to release once “Fool’s Gold” has sold through, according to Sebago Brewing.