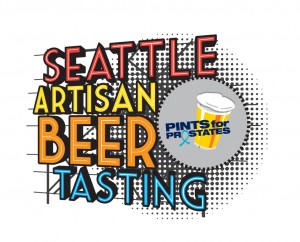 SEATTLE — DRAFT magazine is presenting the inaugural Seattle Artisan Beer Tasting to benefit Pints for Prostates on Aug. 16. The event featuring a collection of two dozen artisan beers and food will be held in two sessions at the Pike Brewing Beer Garden on a roof top with a magnificent view of Puget Sound.

Beer from some of America’s leading craft brewers along with selected classic imported brews will be poured at the outdoor event accompanied by food prepared by the chefs at the Pike Pub and Brewery and specialty cheese from the Pacific Northwest. The two sessions, 2-5 p.m. and 6-9 p.m., will each be limited to 140 guests.

“Seattle is the perfect place to celebrate artisan beer and its inter-relationship with great food,” said Evan Hughes, publisher of of DRAFT Magazine. “We are proud to partner with Pints for Prostates to produce this fundraiser and help them reach men through the universal language of beer.”

“The Seattle Artisan Beer Tasting is going to be an intimate celebration of beer craftsmanship that will help raise funds for the Pints for Prostates campaign,” said Rick Lyke, a beer journalist who founded Pints for Prostates following successful prostate cancer surgery in 2008. “We are bringing together some of the best beers in the world in a unique setting that a small group of beer enthusiasts will get the chance to enjoy.”

Tickets for the event are $65 with a $5 service fee online via ETIX. Tickets include unlimited beer samples, a commemorative tasting glass and food samples in an unforgettable setting overlooking Puget Sound. The event is being held at the Pike Brewery Beer Garden, on the roof of 84 Union St. (at the Post Alley) in Seattle adjacent to the historic Pike Place Market. Funds raised by Pints for Prostates help to support the group’s awareness mission, as well as funding free men’s health screenings provided by the Prostate Conditions Education Council and support groups organized by the Us TOO International Prostate Cancer Education and Support Network.

Pints for Prostates reaches men through the universal language of beer to encourage them to take charge of their health. The group was founded by prostate cancer survivor and beer writer Rick Lyke in 2008. The grassroots effort raises awareness among men about the importance of regular men’s health screenings by making appearances at beer festivals, social networking and pro bono advertising. According to the National Cancer Institute, approximately 240,000 new prostate cancer cases are diagnosed annually in the U.S. More information is available at www.pintsforprostates.org. Pints for Prostates also has a presence on Facebook, Twitter and Instagram (@pints4prostates).

DRAFT Magazine brings you the latest in beer and the life that pairs with it. From epicurean interests and world travel to sports and entertainment, DRAFT Magazine is a 360- degree view of the beer enthusiast’s lifestyle presented through a multi-media platform. Visit www.draftmag.com