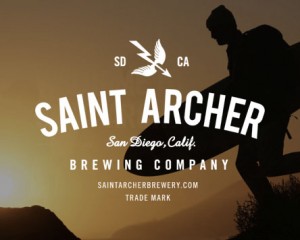 Consortium Holdings (C.H. Projects) is helping to launch the San Diego-based Saint Archer Brewing Company — one of Southern California’s most buzzed about breweries — with a triple tap takeover. Saint Archer boasts a team of stellar brewers and co-owners made up of over 15 action sports and music industry celebrities.

The Saint Archer family will be out in full force introducing themselves to the public at C.H.’s Craft & Commerce, Neighborhood & UnderBelly. More details on the event are below:

WHAT: On Thursday, May 23rd, downtown San Diego will be hit with not one, not two, but three separate tap takeovers set to take place simultaneously at Consortium Holdings’ notorious craft beer havens — East Village’s Neighborhood and Little Italy’s Craft & Commerce and UnderBelly. Led by famed brewers, Ray Astamendi & Kim Lutz, the launch of Saint Archer Brewing Co. is drawing up nationwide excitement with the number of locally based action sports ambassadors and partners involved in the project, which reads like a who’s who of the pro-surf, skate and snowboarding industries. Showcasing the new lineup of beers, theses events are sure to draw out some big names from the Saint Archer family like Paul Rodriguez, Mikey Taylor, Dusty Payne, Josh Kerr and Taylor Knox to name a few. The triple tap takeover will highlight Saint Archer’s clean crisp Blonde/Kolsch-Style Ale, a straight-forward California-style Pale Ale, and their bold, hop-forward IPA.

WHY: C.H. Projects & Saint Archer’s collaboration brings together two like-minded strains of creative talent, coming together with a passion, commitment and thirst for innovation to express their collective true love while adding a different dynamic to San Diego’s burgeoning craft beer scene.

The craft beer experience happens where art and science meet. Saint Archer understands this, so their company was founded on a unique strain of creative talent. World-class brewers. Artists and musicians. Professional surfers, skateboarders, and snowboarders. Saint Archer’s brewery is located in a 17k square foot warehouse at 9550 Distribution Avenue in the Miramar area of San Diego. Their tasting room is located within close proximity of the brewhouse, giving patrons an up close and personal experience where you can taste your favorite Saint Archer beer direct from the source. For more information please call 858.225.2377 or visit www.saintarcherbrewery.com.

California’s southern-most city, San Diego, has for decades been known as a casual, sleepy coastal getaway with a culinary scene to match—fish tacos and Mexican lager epitomized an attitude not unlike that of an adolescent sibling to that of its mature, celebrity chef-embellished neighbor-to-the-north. Enter Consortium Holdings, the visionary restaurateurs-come-social engineering duo that is pioneering the city’s now burgeoning cultural progression with seven ambitious concepts (Craft & Commerce, Neighborhood, UnderBelly, Noble Experiment, El Dorado, Polite Provisions, and Soda & Swine). Co-founders Arsalun Tafazoli and Nathan Stanton have cultivated an intrinsic core philosophy—that a space should inspire, its design aesthetic and culinary /cocktail paradigm allowing for the seemingly lost art of conversation to thrive in an environment that fosters charisma, thoughtful dialogue, and the resurgence of real human interaction. In stark contrast to the overwhelming neon lights and volatile drone that emanates from plasma screens-as-art in less calculated restaurant and bar settings, Consortium Holdings’ projects eschew trendy, stagnant décor and menus in favor of an eclectic, contemporary quality borne out of the collaborative efforts of like-minded individuals with a hunger (and thirst) for innovation. www.consortiumholdings.com