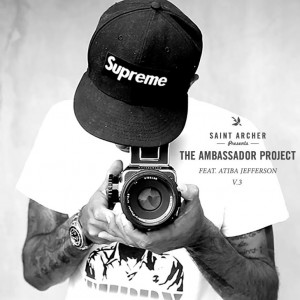 San Diego, CA — Saint Archer Brewing Company is proud to announce the release of its third installment of The Ambassador Project, featuring skate industry icon and celebrated photographer Atiba Jefferson. This film series, which tells the stories of Saint Archer’s owner-ambassadors, offers a unique glimpse into the athletes, musicians, artists, and brewers that make up the diverse group behind this brand.

All of these films are produced entirely in-house and filmed by Saint Archer President and Founder, Josh Landan. From the beginning, Josh felt it was important to continually tell the story behind Saint Archer, and The Ambassador Project is a prime example of that initiative.

This film shares an in-depth look into the life of Atiba Jefferson. From his humble days growing up in a small town in Colorado, to living his dream shooting the best skateboarders, athletes and musicians from around the world, this film inspires people to chase their dreams and have fun in the process.