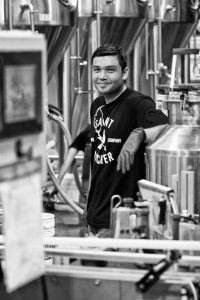 Yiga was introduced to brewing through the encouragement of his father in the 1990’s. He taught himself how to homebrew in his father’s kitchen and enjoyed its’ creativity. In 2006, Yiga began his career with Port Brewing/Lost Abbey through the guidance of Tommy Arthur. He transitioned over to Pizza Port Brewing Company when a delivery position opened. He quickly moved up in the company from delivering beer to head of brewery operations. In those 7 years, Yiga earned many awards at the Great American Beer Festival and the World Beer Cup. He also earned the honor of being named small brewpub brewer of the year at the 2011 Great American Beer Festival.

“We are thrilled having Yiga as the newest member of the Saint Archer family. Yiga’s well rounded expertise in all areas of brewing and his ability to lead and inspire people fit perfectly with Saint Archer,” comments Josh Landan Saint Archer founder and president.

Yiga is looking forward to working fulltime alongside his former collaboration partner Kim Lutz (Head Brewer). Their collective creativity and freedom to experiment will certainly produce some exciting beers.

“I am really excited about this new opportunity with Saint Archer. The vision the brand has set in motion suits my brewing and business goals making the fit seem natural. The primary emphasis at Saint Archer is to brew the best beer possible which was hugely important to me when making the decision to come on board,” stated Yiga.

Saint Archer Brewing Company’s line of beers are currently available throughout San Diego and in their newly opened tasting bar.