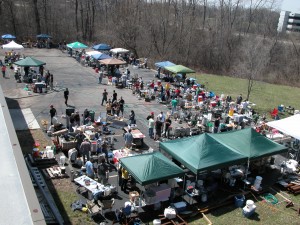 122 batches of beer, totaling 1012 gallons were brewed throughout the day.

“We were completely overwhelmed by the initial response and interest,” said Rochester Mills founder, Mike Plesz. “But thanks to all of our volunteers, staff and a great group of home brewers, it turned out to be a great day for brewing.”

Participants will return on Saturday, June 1st with finished beer to be eligible for the Michigan Homebrew Competition and Big Brew Review. At that time, entrants are invited to return and sample competing beers then vote for their favorite. Additionally, there will be public tours of the production brewery, a homebrew equipment swap meet and breweriana show at the Big Brew Review.

Rochester Mills is host to monthly meetings of local home brew club, The Pontiac Brewing Tribe, who helped coordinate of the event.

Rochester Mills Beer Co. has been one of the top producing brewpubs in Michigan since it opened in 1998. The pub offers a diverse beer menu with eleven different styles of beer consistently available as well as a number of reoccurring seasonal offerings. In 2012 the Rochester Mills Production Brewery was opened and began producing select year-round and seasonal offerings that are distributed across Michigan on draft and in 16oz. aluminum cans and is one of the fastest growing craft breweries in the State.