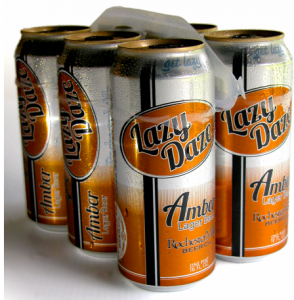 As canning production ramps up, the brewery expects to fulfill shipments to all Michigan markets by October.

Lazy Daze Amber Lager beer has the traditional qualities of a Munich Lager with an ABV of 5.25%. This is a well balanced, highly drinkable beer that is meant to be shared with friends. The convenience and value of a six-pack of 16oz. cans delivers the equivalent of eight, 12 ounce beers. The suggested retail price is $9.99 per six-pack.

This beer was first brewed at the Rochester Mills Beer Co. brew pub several years ago on accident when several bags of Caramel malt were added to the original Lazy Daze Lager recipe. The result was a darker version of the brewery’s popular golden lager. Although extremely popular with pub regulars, it did not make the regular rotation that already included a number of lager beers. The recipe has since been tweaked and refined by the brewmasters to achieve its rich amber color and medium-bodied flavor from a combination of Munich malt for a subtle sweetness and German hops.

“We’ve always used our brew pub like a research and development lab,” says Mike. “Our focus group consists of several thousand loyal repeat customers and mug club members who are more than happy to try new brews and haven’t been shy with their opinions for the last fifteen years.”

“Lazy Daze Amber was an obvious choice for the first lager in our portfolio of distributed beers,” Mike continued. “It’s an easy drinking, gateway beer to our more flavorful craft ales.”

Rochester Mills began distributing three craft ales (Cornerstone IPA, Rochester Red Ale and Milkshake Stout) year-round in May of 2012 on draft and in 16 oz. can four-packs.

Rochester Mills Beer Co. has been one of the top producing brewpubs in Michigan since it opened in 1998. The pub offers a diverse beer menu with eleven different styles of beer consistently available as well as a number of reoccurring seasonal offerings. In 2012 the Rochester Mills Production Brewery was opened and began producing select year-round and seasonal offerings that are distributed across Michigan on draft and in 16oz. aluminum cans and is one of the fastest growing craft breweries in the State.