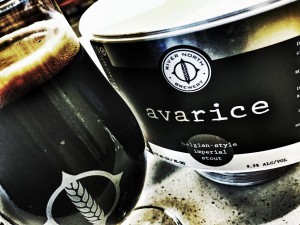 Denver, CO — As summer wanes and the days grow cooler, River North Brewery craves a robust beer fitting for the season. Something dark. Something rich. Something sinful.

The only beer that will satisfy their craving: Avarice. The brewery’s signature belgian imperial stout will hit store shelves throughout Colorado this week, and will be available through the winter.

Bone-dry and chock full of roasted barley, Avarice is so dark no light can escape it. Seriously, put a flashlight up to this beer and watch the light disappear as if sucked into a black hole. By utilizing a Belgian yeast strain, it ferments out a higher percentage of sugars when compared to other imperial stouts. This leads to the most quaffable 9.3% stout you’ve ever tasted. There’s a reason Avarice is so highly rated.

As one of the seven deadly sins, it’s understandable if you get greedy with bottles of Avarice. While this beer is damn tasty fresh, it’s also an ideal candidate for hoarding in your cellar.