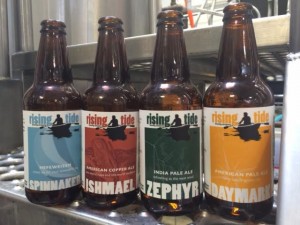 PORTLAND, MAINE — This week, Rising Tide Brewing Company, a small family-owned brewery in Portland, began packaging its core beers in 12 oz. bottles for the first time. The smaller bottles will replace the brewery’s 22 oz. bottles for its year round offerings, including Daymark pale ale, Ishmael copper ale, and Zephyr IPA, as well as for their summer seasonal, Spinnaker hefeweizen.
Rising Tide’s four packs will be available in Maine initially and will be rolled out in Massachusetts, New Hampshire, and Vermont in early April. “Transitioning to a smaller bottle size is key to enabling us to continue our rapid growth without sending our beer farther from home,” said co-owner Heather Sanborn. “We want to focus on our local markets where we can keep the beer as fresh as possible.” Rising Tide will continue to produce 22 oz. bottles of limited release beers, as well as 375 ml. cork-and-cage bottles of barrel aged beers.Founded in 2010 with a tiny one-barrel brewing system, Rising Tide completed an expansion in summer 2012 with the installation of a custom-built fifteen-barrel brew house in a 5,000 square foot facility on Fox Street in Portland’s East Bayside neighborhood. The brewery then doubled its production capacity in early 2014 with the addition of three new locally fabricated fermentors. Rising Tide is located within walking distance of Portland’s Old Port area. The brewery welcomes visitors in its tasting room where they can sample the beers, take a tour, and buy some bottles or a growler to take home.