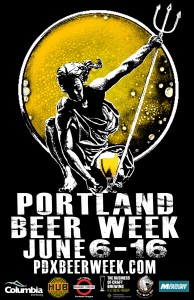 PORTLAND, Ore. — Portland Beer Week released the first round of events in this year’s events calendar, revving things up on June 6 with a Kickoff Party at Lucky Lab Beer Hall, 1945 NW Quimby, and ending with the Beer & Cheese Festival at The Commons Brewery , 1810 SE 10th, on June 16.

Additional events will be added as plans firm up, organizers promised. Keep tabs on all the festivities at pdxbeerweek.com/calendar

In its third year, Portland Beer Week is designed to educate and celebrate beer and Portland’s incredible beer community.

Portland Beer Week is Presented by:
Columbia Distributing is one of the nation’s largest malt beverage, wine and non-alcoholic distributors. Our success is based on the fact that we never lose sight of delivering what are really important—quality products, timely service, and a genuine concern for our customers’ needs.
Hopworks Urban Brewery Proudly brewing world-class beer as sustainably as possible in Portland, Oregon since 2007. Hopworks Urban Brewery and Hopworks BikeBar are Portland’s first Eco-Brewpubs. We offer handcrafted organic beers and fresh, local ingredients, all served in sustainably-built and operated buildings with a relaxed, family-friendly atmosphere.
Portland State University (PSU) is starting the nation’s first comprehensive online Business of Craft Brewing program where you will actually learn from local brewers and distillers, as well as PSU School of Business faculty and finance and accounting experts who specialize in the craft beverage business. The curriculum provides a thorough overview of the processes that go into making and selling craft beverages, including basic business principles, how to develop your brand, marketing and distribution strategies as well as the financing, legal and accounting issues faced by craft beverage businesses.
Belmont Station Since its founding in 1997, Belmont Station has become Portland’s premier beer destination. The bottleshop features 1,200+ beers that have been thoughtfully selected, meticulously rotated, and properly stored under UV-filtered light to maintain the freshest selection of beer in the region. The adjacent Biercafé features 16 rotating taps and a cask “beer engine” pouring world-class brew on the cleanest draft system in Portland. Join us, and find out why we’re the most award winning beer spot in the northwest!
Horse Brass Pub is a traditional English-style pub in beautiful SE Portland proudly serving proper 20 oz. Imperial pints and traditional English and American pub grub since 1976. First time at the Pub? Let us know! Our well versed staff know their way around our taps, beer styles, Portland, and the state of Oregon. You can ask our staff anything!
Portland Mercury is Portland’s Most Awesome Weekly Newspaper. Covering Portland news, politics, music, film, and arts; plus movie times, club calendars, restaurant listings and more.