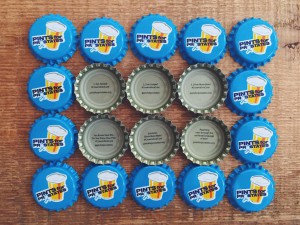 Charlotte, N.C. – Pints for Prostates is partnering with more than 40 craft brewers across the United States on a program designed to start conversations about men’s health when guys get together to relax and enjoy a beer.

Pints for Prostates Crowns for a Cure is distributing more than 1.6 million bottle caps – known in the beverage trade as crowns – to craft brewers around the country to use on beer they package for distribution during September, which is National Prostate Cancer Awareness Month. The crowns feature the Pints for Prostates logo on the outside, with messages under the caps designed to encourage men to learn more about the importance of regular health screenings.

“We are partnering with some great breweries to put a reminder in the hands of men to take charge of their health,” said Rick Lyke, a prostate cancer survivor who started Pints for Prostates in 2008 after successful treatment for the disease. “After a successful trial of the program in 2015, we know these bottle caps will start thousands of conversations and encourage guys to talk with their doctors about scheduling health screenings.”

Each brewery taking part in the program is receiving a shipment of between 10,000 to 50,000 Pints for Prostates crowns. The brewers from 26 states will use the caps in bottling runs and distribute the beer to retail accounts during September.

Pints for Prostates 2016 Crowns for a Cure participating breweries include:

“The craft beer community has been incredibly supportive of the Pints for Prostates mission and generously assisted us in getting our message to millions of men over the last eight years,” Lyke said. “If Pints for Prostates Crowns for as Cure reaches just one guy who benefits from a prostate health screening, then the effort will be a huge success.”

Beer drinkers who spot Pints for Prostates crowns are encouraged to help spread the word by tagging photos on social media with #CrownsforaCure and @pints4prostates, along with the brewery name and location where the bottle caps were found.

Homebrewers who want to take part in Crowns for a Cure can do so by ordering bottle caps from Northern Brewer, which partnered with Pints for Prostates earlier this year on Homebrew Strong, an awareness building effort which includes a special brewing kit.

Pints for Prostates is a 501(c)3 non-profit charity and funds raised by the group go towards its awareness mission and help to fund the education and support programs of the Us TOO International Prostate Cancer Education and Support Network, and free prostates cancer screening programs provided by the Prostate Conditions Education Council.

Pints for Prostates reaches men through the universal language of beer to encourage them to take charge of their health. The group was founded by prostate cancer survivor and beer writer Rick Lyke in 2008. The grassroots effort raises awareness among men about the importance of regular men’s health screenings by making appearances at beer festivals, social networking and pro bono advertising. According to the National Cancer Institute, approximately 233,000 new prostate cancer cases are diagnosed annually in the U.S. More information is available at www.pintsforprostates.org. Pints for Prostates also has a presence on Facebook, Twitter and Instagram (@pints4prostates).